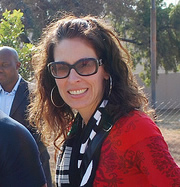 ZBC Chief News correspondent, Reuben Barwe, was granted a visa on Tuesday to travel to the United Nations General Assembly in New York. This is despite a report in the state owned Herald newspaper claiming Barwe and CIO boss Happyton Bonyongwe had been denied visas by the US embassy in Harare, when they were due to travel with Mugabe to the UN summit.

On Tuesday SW Radio Africa spoke to Sharon Hudson-Dean, a spokesperson at the US embassy in Harare, who told us; ‘They were not denied visas and in fact, as of today the 21st September, both of them have their visas. Mr. Bonyongwe’s visa was issued on Friday 17th September as part of the official delegation. Mr. Barwe’s visa was issued today.’

Hudson-Dean said; ‘Their visas did take some time for administrative processing because of the number of visa applications (80 people) from Zimbabwe for the UN General Assembly. We were not able to complete all of the processing immediately. Barwe’s visa took a bit longer because he is not part of the official delegation, but he did receive it today.’

So why did the Herald newspaper report that Mugabe’s regime had made a formal complaint to UN Secretary-General Ban Ki-Moon, alleging the denial of the visas was a violation of international law by the US? The paper also said this was the ‘second successive year that members of the President’s delegation to the UN have been denied visas by the US embassy, following the denial of a visa to Herald Deputy Editor Caesar Zvayi and Retired Major-General Bonyongwe last year.’

US urges Americans to leave Ethiopia urgently as rebels join…

‘I think it is unfortunate that nobody called us or called me before the story ran. We would have been very happy to try and explain the situation.’ Hudson-Dean said the visas take a longer time to process because travel by certain Zimbabweans who are on targeted travel restrictions is vetted by multiple agencies in the United States before the embassy is given the green light. ‘That is what happened in Barwe’s case, the administrative process took longer.’

But why is the US government giving visa’s to members of the Mugabe regime who it placed under targeted travel and financial restrictions? Hudson-Dean said despite a presidential proclamation from the US restricting certain government officials from traveling this ‘also contains an exception to permit the US to meet its international legal obligations such as those under the United Nations headquarters agreement.’ Because the UN headquarters are in the US, they are obliged as the host country to issue the visas. SW Radio Africa

NB: The full interview with the US Embassy spokesperson in Harare Sharon Hudson-Dean can be heard on SW Radio Africa’s Behind the Headlines programme this Thursday. Lance Guma asks her if there is any point to the targeted travel restrictions if there are to be exceptions like travel to the UN?