Strange as it may sound, there are times when the right decision is actually made based on the wrong reasons.  The death of Zimbabwean patriot, Gibson Sibanda, has demonstrated the reality of this ironic and rare phenomenon. 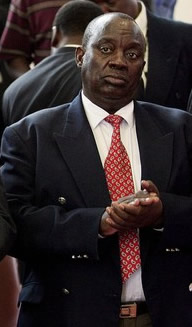 The ZANU-PF elite decided not to formally designate Sibanda a national hero.  It was a haste decision, a good one by default.  In any normal country run by a leader in full control of his or her faculties, Sibanda would have been given a national farewell befitting his status.

Alas!  This was not the case.  Given the brand of cult politics plaguing it, Zimbabwe is not a normal country.  Despite the gene of insensitivity in the DNA of ZANU-PF and the crass politics of the governing elite, the Zimbabwean nation i.e., that which is not defined by the ZANU-PF elite and its army of brain-dead sycophants, rightfully mourns the passing of one of its most principled and patriotic sons, Gibson Sibanda.

Son of the Soil Gibson Sibanda spent four years in Rhodesian jails because he was caught doing the right thing, namely; facilitating the liberation of the Zimbabwean people from forces of evil.  Mugabe and his band of sycophants do not think Sibanda’s war-era activities and his work as a trade union leader matter.

PART THREE: History of the MDC… The National Working…

Where is this Train going?

The Zanufication of the MDC: Dumisani Muleya

Had he shamelessly and fraudulently claimed a huge payment as compensation for suffering hard-to-believe 95 % injury while in Ian Smith’s jail or had he gone on a rampage playing his part destroying the country’s economy or wantonly murdered unarmed Zimbabweans sanctioned by the ZANU-PF elite, all this while carrying a dead brain between his ears, Sibanda would have met some of the unbelievable conditions that seem to matter for one to be formally declared a national hero nowadays.

On Sibanda’s national hero status, the action of the ZANU-PF elite does not matter anyway.  Sibanda is a hero in the heart of anyone with a single strand of moral fiber in his or her body.  These are the majority of the people from Mutare to Plumtree, and from the southern bank of the Zambezi River to the northern bank of the Limpopo River. Therefore, Sibanda did not have to be declared a hero by an evil institution like ZANU-PF to be the people’s national hero.

There is no doubt that Sibanda knew evil when he saw it.  It is ZANU-PF.  As long as the aspirations of the Zimbabwean people to have unfettered rights to the full enjoyment of life are still abridged by the ZANU-PF political establishment, the nation cannot be considered completely free.  All the rhetoric about consolidating the gains of independence is completely meaningless.

Whatever gains the nation may have made on attainment of independence, the greedy and homicidal ways of the ZANU-PF elite have negated them.  On the 18th of April 1980, Zimbabwe may have celebrated the removal of one evil but few realized that another equally sinister and more dangerous indigenous manifestation of the same evil had taken over.

Surely, Sibanda must have been one of the very few who realized that the removal of Ian Smith and his elite from the seats and corridors of power did not bring real independence to Zimbabwe as everyone had hoped for.  Independence only marked the beginning of the indigenization and accelerated implementation of the UDI agenda of the suppression of the initially lulled black people and anyone else not prepared to bend over backwards for the chefs from previously based in Maputo and Birmingham England.

Son of the Soil Sibanda was not fooled by this brand of indigenization agenda.  The common worker was still getting a paltry wage in a presumably free country; this while the indigenized forces of evil went on a spending free as they looted the cash reserves left behind by Ian Smith.

After independence, Gibson Sibanda picked up the fight right from where he had left when Ian Smith’s goon squad incarcerated him.  The forces of evil had only changed their skin colour but remained horned and forked.  They had to be confronted.  Lucifer’s spawn were roaming freely while giving flowery speeches and promising the nation huge mountains of sugar, rivers of honey and lakes of milk – gutsa ruzhinji, they called it – none of which ever materialized.

It was not an easy task but Sibanda and few like-minded patriotic Zimbabweans decided to sacrifice their own flesh, blood and bones for the good of the country.  This is the hallmark of a genuine national hero.

Just as he had done his part to liberate Zimbabwe from Ian Smith, so did Sibanda fight to liberate Zimbabwe from Robert Mugabe and his henchmen.  Evil remains evil regardless of its morphed racial appearance.  The ZANU Patriotic Front elite has proven to be worse than elite of the Rhodesian Front, never mind the ZANU-PF cacophonous protestations on state television, radio, print and electronic media.

It is not possible to jingle away stains of the blood of thousands that perished for no good reason beyond the elite’s greed for power and accumulation of personal wealth.  Praise songs by cultist followers will not soothe away the pain of hunger chewing away the flesh of the nation.

Reminding the nation of, and claiming credit for the gallantry that forced Ian Smith out of power will not console a mother that has never stopped grieving her child whose life was brutally lost at the hands of the Fifth Brigade.  It would not have been acceptable to have Gibson Sibanda’s burial presided over by a member of the ZANU-PF elite.

The elite of the Rhodesian Front found creative ways to not only wrest power from the perennially hapless British government and brutally retain that power afterwards but also keep the economy functional in the face of a hostile international community.  The same cannot be said about its successor.

The elite of the ZANU Patriotic Front has its creativity restricted to using brute force to retain power and trotting out one insulting justification after another to conceal its lack of natural leadership skills. Clearly, Sibanda was not impressed by the jongwe elite’s empty verbal theatrics.

Mugabe’s oratory skills may have fooled many but not clear-minded Zimbabweans like Gibson Sibanda.  To begin with, the ability to speak English in a false British lilt does not miraculously transform a mere schoolteacher into a leader.  In Mugabe’s case, it never did.  Ignore the flamboyant words because they have little meaning apart from their entertainment value, as candidly observed by Professor Jonathan Moyo.  Look at the record.

Unlike silver-tongued Mugabe, Sibanda was a humble leader.  Mugabe’s supporters resent it.  Furthermore, using the tools of hunger and poverty, all caused by poor leadership, to conscript mentally retarded youths for a personal militia is not proof of leadership but undeniable evidence of the lack of basic common decency.

Our ancestors taught us that wafa wanaka but Sibanda did not have to die first to be a good man.  He was already a good man while we had the pleasure and humbling honour to walk this planet with him.  Contrary to the strictures of our African culture, the ZANU-PF elite’s army of the mentally incapacitated went on the internet to wage an undignified war against Gibson Sibanda even before his burial.  ZANU-PF did not give him reprieve even in death.  What a crying shame!

He was a traitor; they parroted the talking points given them by their wicked masters, the ZANU-PF elite.  The Zimbabwean people know a traitor when they see his ways.  Had Sibanda bought guns and bullets from the communist Chinese government not to protect the country’s helpless and defenseless but to mow them down, he would have been a real treasonous viper.  That area is the protected and exclusive habitat of ZANU-PF.

No, Mugabe was not fit to preside over the burial of Gibson Sibanda.  That is what would have happened had Sibanda been declared a national hero.  Let us remember that Mugabe’s only opportunity to address a large crowd and the nation is now offered by state funerals.

His handlers know that he has nothing of substance he has to say that is worth listening to under any other circumstances.  So, state funerals afford Mugabe the rare occasions that he gets to show the world the ZANU-PF elite’s lack of dignity and penchant for abusing our culture that makes it mandatory to bury our dead without rancour and insults.

As Africans, we must never forget that in our culture the two most important events in one’s life are at birth and the day in which the body of the deceased is laid to rest.  As a matter of fact, the day of burial is even more important.  It is on this occasion that the body of the dead leaves the company of the living and the spirit is entrusted to the exalted company of the ancestors.

An African burial is an ancient procedure that must never be besmirched by letting an unrepentant man presided over it.  In ancient times only a man who strictly adhered to the African mores presided over burials.  Certainly an elite whose poor leadership has caused thousands to perish by the bullet, hunger and, preventable and curable diseases is the wrong person for such an important traditional rite.  So, we should not bewail the fact that Mugabe’s handlers did not hijack Gibson Sibanda’s most important and last day his body would be with us.

Burial at the National Hero’s Acre, lately a de facto burial ground for Mugabe’s sycophants, would have taken away the dignity of the traditional African burial that Gibson Sibanda deserved.  When Lord Didymus of Birmingham-England said Sibanda was not going to be buried at the National Heroes Acre, I agreed with him.

It is not that often that I find myself in agreement with a man, Didymus Mutasa, who shamelessly claims to have simultaneously fought for the liberation of Zimbabwe and living in Birmingham England.  Didymus Mutasa, he of a character so repulsive his son’s funeral was boycotted by some of his own relatives, probably the most culturally humiliating ostracization a man can get, is not fit to lick the footsteps left by Gibson Sibanda.

It is good that Filabusi is the final resting place for Son of the Soil Gibson Sibanda.  It would have been totally unacceptable to have ZANU-PF use his coffin as a pulpit from which to insult people.  Using Sibanda’s grave as a plinth for a political rally would have demeaned his family.

Let the increasingly un-African denizens in ZANU-PF do that with the bodies of people like Reward Marufu and Eliot Manyika because the nation does not care one wit.  Sibanda deserved better than that.  Consequently, the snub was the correct decision even if the vile reasons were an expected act of ZANU-PF wickedness.

PART THREE: History of the MDC… The National Working People’s…

Where is this Train going?

The Zanufication of the MDC: Dumisani Muleya

ZCTU have sold out on constitutional reform