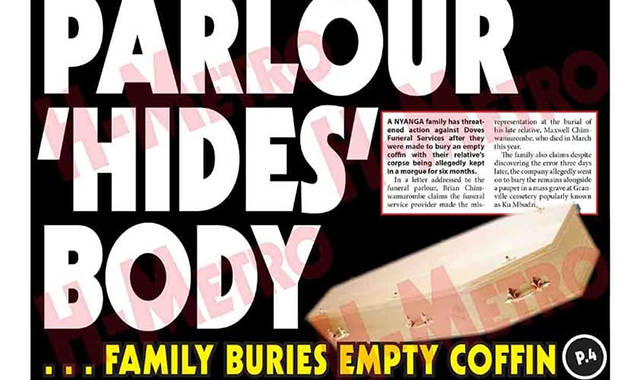 A Nyanga family has threatened action against Doves Funeral Services after they were made to bury an empty coffin with their relative’s corpse being allegedly kept in a morgue for six months.

In a letter addressed to the funeral parlour, Brian Chimwamurombe claims the funeral service provider made the misrepresentation at the burial of his late relative, Maxwell Chimwamurombe, who died in March this year.

The family also claims despite discovering the error three days later, the company allegedly went on to bury the remains alongside a pauper in a mass grave at Granville cemetery popularly known as Ku Mbudzi.

Further allegations point that Doves had concealed the evidence from March to August this year.

The woman who led Ginimbi in death

A complaint has been already logged at the police headquarters, the Zimbabwe Anti-Corruption Commission and Zimbabwe Chief’s Council with investigation currently underway.

The family through its lawyers said they could not rule out ritualism.

“In a more shocking and completely unheard-of move, the burial was a mass grave type of burial.

“All circumstances the burial being utterly disrespectful and demeaning the Chimwamurombe family.

“One cannot rule out ritualism,” reads the letter.

The family accused the parlour of burying their relative without their consent despite noticing the error.

“Your organisation, in a completely bizarre and potentially callous and criminal manner, proceeded to conceal evidence by burying our client’s relative (without their knowledge and consent) with a pauper at Granville cemetery.

“Your organisation kept quiet about the body it had from March 2021 to August 2021 (approximately 6 months),” continued the letter.

According to the lawyers, Doves failed to live to their word despite acknowledging the injury and having attempted to rectify the error with the family.

A “high-powered delegation” from Doves led by its director Farai Matsika, the Human resources executive, the group public relations manager Innocent Tshuma and the Chaplin had approached the law firm admitting to the negligent, injurious and criminal conduct.

“We cannot say that was achieved. Your delegation blew out hot and cold when asked by our Mr Gombiro whether they accepted the facts amounting to your criminal, negligent and injurious conduct,” added the lawyers.

The family said it is reserving the right to sue Doves for causing emotional pain and suffering.

It also said this means the funeral has been reopened and they are seeking immediate action over the scandal.

In a statement, Doves through its group public relations manager Innocent Tshuma, empathized with the Chimwamurombe family promising to carry out full investigations.

“We therefore implore on the family and all stakeholders involved to walk with us as we follow the due process.

“We are fully cognizant of the emotional stress the family is going through and as management we are keen on getting to the bottom of the matter which will ultimately lead to an amicable settlement of the matter,” said Tshuma.

He said the company was committed to operating its business in a professional and transparent manner which has been its hallmark for over a century. H-Metro

The woman who led Ginimbi in death

Ginimbi’s Ferrari overheats, abandoned after getting stuck in Harare CBD