Hideouts for crime and sleaze 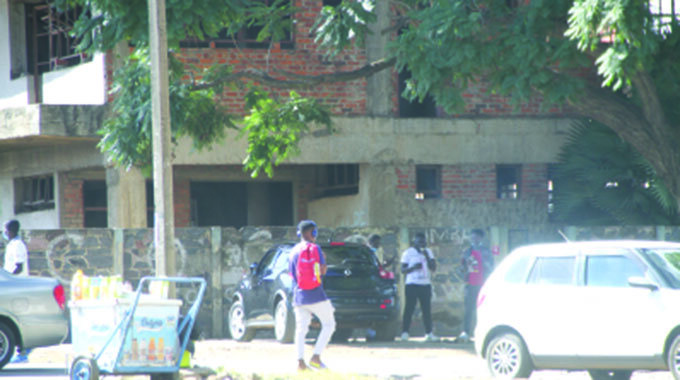 Derelict buildings in towns and cities have not only become an eyesore, but a hideout and habitat for criminals, and convenient warehouses for both stolen goods and drugs, The Sunday Mail Society has established.

While such buildings have always been associated with illegal activities, it appears the scale and magnitude of sleaze has escalated to worrying levels.

The Zimbabwe Republic Police is currently undertaking a massive crackdown on drug peddlers and criminal syndicates.

Land barons back as 2019 report gathers dust in Mnangagwa’s…

Police say claims that Thokozani Khupe was arrested are…

The dragnet by law enforcement agents has, in addition to accounting for drug dealers, also netted criminals who were wanted for crimes such as carjacking, rape, fraud and housebreaking.

It has since emerged that some of the notorious criminals are using disused buildings, particularly in and around the central business district (CBD), to evade police and launch their activities.

But Government is determined to smoke them out.

“It is possible that some abandoned buildings are being used by criminals and vagrants for nefarious activities. Government, through relevant authorities, is investigating the matter,” said Local Government and Public Works Deputy Minister Dr Marian Chombo.

“We want to quickly ascertain the activities taking place in those buildings and address the situation because this is a sensitive matter . . . The exercise is not limited to Harare.”

But why are the buildings, some of which have been condemned by local authorities, being allowed to rot and become criminal habitats?

“Legally, councils are allowed to take over if a condemned building — both commercial and domestic — is abandoned for five or more years. They have a lawful right to either demolish or refurbish condemned structures.

“In the event that they bring back to life an abandoned building, they can recover their costs from the owner or by leasing out the place,” said Engineer Harrison Marange.

“It is imperative that they take over some of these buildings as they are now harbouring criminals and vagrants; for instance, along Luck Street in Harare. People’s lives are at stake. Some of the owners are no longer around, hence the need for action on council’s part.”

Harare City Council, however, argues its “hands are tied”.

Spokesperson Mr Michael Chideme said: “It is unfortunate that a lot of misdemeanours are taking place in these buildings.

‘‘The owners should act quickly lest the entire CBD becomes a crime zone. However, we have no demolishing powers in most instances since the buildings belong to private owners. But, as council, we will continue to claim rates from them.”

The abuse of old and disused buildings has always been a challenge in most towns and cities across the country.

Seasoned music promoter Josh Hozheri once faced serious challenges with criminals that operated from an abandoned building along Sixth Street, a spitting distance from Cresta Oasis, where he used to run Time and Jazz Café.

They periodically broke into patrons’ cars at his night club before strategically retreating into the rundown building.

Hunting them down was suicidal.

The abandoned structure is still there and understood to be providing shelter to rogue elements.

It is believed that during the day, some of the criminals masquerade as airtime vendors, illegal money changers and even provide car-wash services.

Maria Chikuni is still traumatised after she was mugged last year while on her way home.

On the fateful day, she was walking to Market Square Bus Terminus.

A young man came from behind, snatched her phone before disappearing into a vacant building situated at the corner of Chinhoyi and Robert Mugabe Streets.

The building, which formerly housed a local bank, was destroyed by an inferno.

“Some passers-by tried to assist me but the vendors discouraged them. They said it was dangerous for anyone to follow the phone snatcher in the dingy building as there were more criminals inside,” she said.

The ongoing wrangle between City of Harare and a prominent businessman has also created a mess in the Avenues area.

Vacant flats adjacent Fife Avenue Shopping Centre are reportedly being used as a hideout by criminals.

Investigations suggest most drugs peddled in the area are stashed there, while commercial sex workers have made it their home.

Of late, there have been increased incidents of muggings and robberies near various derelict buildings in towns and cities.

It has become so bad that even the heart of the capital, Harare, is not spared.

For example, there is a white, rundown building with neat precast walls along George Silundika – between First Street Mall and Sam Nujoma Street – that has become notorious.

“You can get marijuana, mutoriro, illicit brews and any other drugs here. When you buy, there is also an option for consumption of the substances within the premises . . . others come for our ‘ladies’ that offer ‘quality time’ for a fee,” said one of the street people who mill around the area.

Further, while these condemned structures used to be patronised by sex workers and street gangs, this has since changed.

Some of the supposed street gangs have either been driven out of the new “strategic areas” or forced into partnerships of sorts either as drug peddlers or security for stolen items.

One of the street people who have been affected identified himself as Itai.

He was displaced from his base — situated at corner Abdel Gamal Nassar Road (former Rotten Row) and Samora Machel Avenue in Harare (name withheld) — which used to be a lodge.

The building is currently unoccupied.

However, in the past it was notorious for accommodating ladies of the night.

“We had peacefully settled after the hotel became vacant.

‘‘But we were recently chased away by some men that came and told us they bought the place and did not want to see us there,” said Itai.

“We tried to resist but they threatened to kill us. One of the guys even produced a gun. Several people now frequent the place, though I am not sure what they will be up to since the place is still closed.”

As investigations into the state of these buildings continue, most people want this to be resolved soon. The Sunday Mail

The girl with a lion’s heart

Granny who spent days with decomposing corpse remanded in custody

Police say claims that Thokozani Khupe was arrested are false