A Harare man had been living with his dead wife for a number of days. 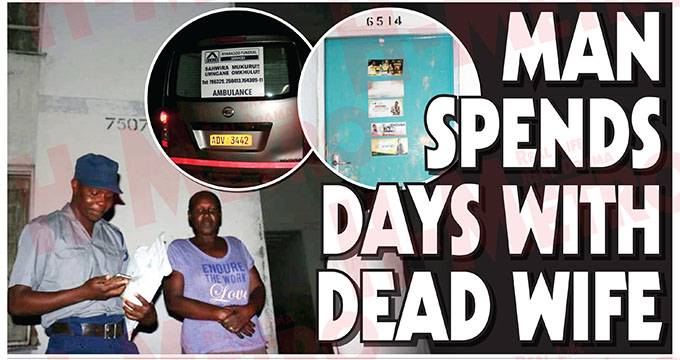 Percy Njikizani from Glen Norah A never reported the death of his wife, Elar Mundembe to the police. He was also never seen coming out of their flat for the past two weeks.

Neighbors called the police after a stench from the flat raised their suspicions.

Circumstances leading to the death could not be established.

“This woman was not free to let anyone in her house or life.

“I stayed here for 11 years but I never got into her house, so she was that reserved that no one would get close to her.

“So when this unfortunate incident occurred, the best that we could do after that persistent bad smell was to call the Glen Norah police and to call their nephew called Edie who stays down there in Glen View 7 Extension. Edie is her nephew from her husband’s side.

“We had been suspecting this odor to be of a rotting rat for days.”

The neighbor said when the police arrived, they broke in and discovered the corpse on the sofa while the husband was in another room seated on the bed.

“It is not normal for one to stay in the same house with a dead person.

Another neighbor, Byron Mujoko, said he was shocked that the woman had died.

“Momz vanga vari bho though vayisasasa na everyone, she was very reserved, she was my wife Memory Dhliwayo’ s good customer at her work at Ebony Hair Saloon at Machipisa. My wife did her hair in February, I knew Mai Njikizani since 1999 when I was working at Glen Norah Supermarket and she was working for Harare City Council.

“She was a very good neighbor to live with.

“There is a guy called Tanya from the back of this block who came to me saying Mai Njikizani asked him to pray for her because she was having continued challenges in breathing.

“She ordered people to pray for her from a distance, not inside her house,” said Mujoko.

“Mai Njikizani was not a fancy woman but she is that kind of a reserved person who often wanted to live a lonely life. Imagine, she is the only person I would leave my children with whenever I was at work, so a person that you entrust your children with, that person will be a good person,” said Masomera.

The late Njikizani is survived by a husband and a 27-year-old child called Nyasha. H-Metro

Luke-ing the Beast in the Eye: JOC GOES FOR BROKE … as regime frets over Action