By Arron Nyamayaro and Tanyaradzwa Mamombe

A big dead python was found stashed in a sack under a bed in a Mbare household on Monday. 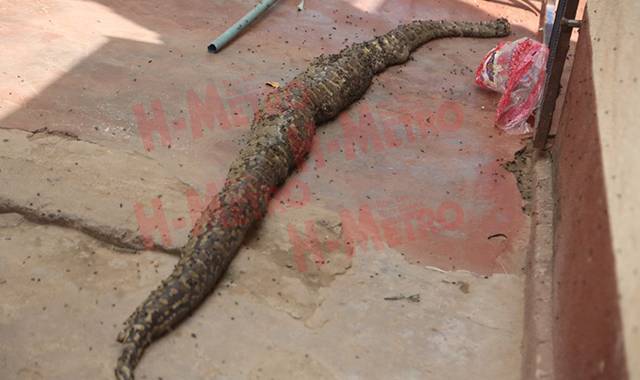 The reptile was discovered after one of the tenants at House 37 Yotamu Way failed to stomach an odor in the house and informed the landlord Gogo Stella Simbi, 75.

It was found in the room where one of her granddaughter Stella Simbi, 30, stays.

Residents thronged the place with some calling Gogo Simbi names before the snake was collected by National Parks and Wild Life Management officers.

Police officers controlled the crowd as some threatened to destroy the precast wall to gain entry to the house to search if it was the only unusual item within the house.

Gogo Simbi said the python was brought by Stella’s two friends who live in Zengeza and she took the girls to Stodart police station.

“My granddaughter named after me Stella Simbi’s two friends visited us three days ago and they are the ones who brought the sack,” said Gogo Simbi.

“They refused to hand over the sack and they proceeded to Stella’s room with the sack and we were not aware what was in it.

“One of my children who stays in Zengeza came as well that day and Stella’s two friends accompanied her to Zengeza and the friends returned the following day.

“I took them to Stodart police station where I left them around midnight.

“One of the tenants complained about the stench which was coming out of Stella’s room and today (Monday) we removed her bed and discovered the sack with the dead snake.”

She said she had no full information on how Stella’s friends decided to bring the python to their house since Stella was in Mozambique.

“Residents have been accusing me of witchcraft and calling me names but my hands are clean.

Harare Province police spokesperson Assistant Inspector Webster Dzvova confirmed the incident urging members of the public to report such cases instantly since a python is a protected species.

“The story was reported to Mbare police after two unidentified people came to her house with a brown sack claiming to be her daughter’s friends.

“The two slept in the other room where they left the sack and departed.

“Two days after the two people left tenants complained about an unusual smell that was coming from one of the rooms.

Zimparks spokesperson Tinashe Farawo confirmed that they were alerted about the python that was found in Mbare and urged members of the public to quickly inform them as soon they see wild animals.

The mob alleged that the python belonged to Gogo Simbi.

“That python is not normal it has juju written all over, it’s mysterious.

“Do not let that woman lie to you; she knows where the python came from.

“A python is known for being a mysterious snake.

“The house is known for its mysterious happenings; recently a tortoise was found at this very same house.

“Why was the python in her house.

“I live nearby and I know that old lady very well, recently she had a fight with her daughter who fled and went to Mozambique.

“The fight saw the mother and daughter trading witchcraft accusations,” said Eunice one of the residents.

Residents demanded to know why the snake had a bulging stomach.

“We want to know why the snake’s stomach is swollen like that; yadyei?

The residents also demanded to know what the python has been consuming to be that huge.

“That snake is very huge I wonder what it had been eating.

“We are very happy that this snake was discovered at least girls from this neighborhood can start getting married,” said Billy Jakata.

“We want to see what’s in that big belly if it’s not money maybe it’s a child.

South Korea to pay families hundreds of dollars to ease…

North Korea slams Pompeo and says will ‘walk our…