…We’re being robbed of our time: Industry

This comes against a backdrop of persisting long queues in the country as people throng banks for cash withdrawals while many have of late been queuing at EcoCash shops to query failed transactions and queuing for fuel.

In wide ranging interviews by captains of industry and workers union professionals with H-Metro, many raised concerns over the impact of time spent in queues by employees.

Chief Executive at Zimbabwe National Chamber of Commerce, Christopher Mugaga said employers are being robbed of their time when workers spend considerable time in queues. 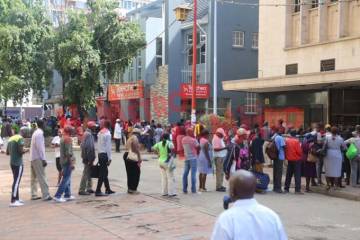 “Production is lost and employers are being robbed of their time.

“Inefficiency in banks is a factor which comes from these long queues because clients end up getting poor service and confidence in the sector is lost.

“People are not motivated to deposit their monies by these long queues since they’ll dread the process of coming back to transact or withdraw.

“This kills the circle in the banking sector where loans are no longer offered to clients because there no deposits,” said Mugaga. 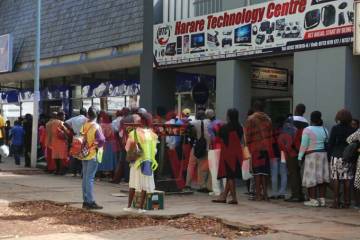 “Definitely there is massive loss in productivity as people spend more time looking for fuel or queuing for cash.

“Loses to businesses are huge and If you add power and fuel shortages it’s even worse for businesses,” said Nguwi.

“We need a permanent solution to the fuel queue challenges affecting the industry and businesses as a whole.

“When one needs to make a truckload delivery anywhere, it becomes difficult as one has to spend the whole day in the queue.

“Our manager, workers or employees are now asking for time off which then becomes a major setback in the industry.

“On the current transaction challenges, I believe the parties involved are making an effort to resolve the issues since the transactions are not smooth,” said Ruzvidzo.

Terrence Kwaramba, head of human resources at Alliance One Tobacco said workers are spending more time in the queues and less time at work.

“It is obvious there is a huge impact on production due to these long hours in queues because employees are spending much time in queues than being at work.

“Workers raise EcoCash premium challenges where they pay up to 40 percent to get cash and with the EcoCash challenges, they have to find cash before they come to work and it has become time consuming as well

“The abnormal has become the normal, the situation is no longer a surprise even though we cannot quantify the amount of time,” said Kwaramba.

Fortunate Sekeso, CEO at Institute of People Management of Zimbabwe said as an institution she could not delve further on the matter but urged human resources practitioners to look into the concerns.

“As an institution we cannot comment much since we are not on the ground level but I encourage and implore all human resources practitioners to react and motivate their workers so that productivity is maintained,” she said. H-Metro

Kadewere back with a goal