‘These ruling monsters are forever limping from one disaster to another’

Emmerson Mnangagwa’s regime has finally eroded all semblance of residual sanity anticipated from any government run by people with brains between their ears.

The carnivorous regime has just bared its rotten teeth that are stained with human blood. The brute’s lethal smile, this time around, is emitting more fatal drool.

Obituary: Fallen MDC hero Judge Ncube was not a man of…

Sibanengi Dube: Smuggling legitimacy through the back door…

This is twaddle at its best. I am feeling like reaching for my knobkerrie in my boot and head towards Health Minister, Obadiah Moyo’s Borrowdale residence to whack some sense in his greying head, maybe next time, he will spare us this kind of riff-raff.

The naked truth which is eluding his tired brains is that, Zimbabweans need medical doctors more than him. I suppose my initial plan to re-arrange his brain cells using the services of a knobkerrie is not bad at all. 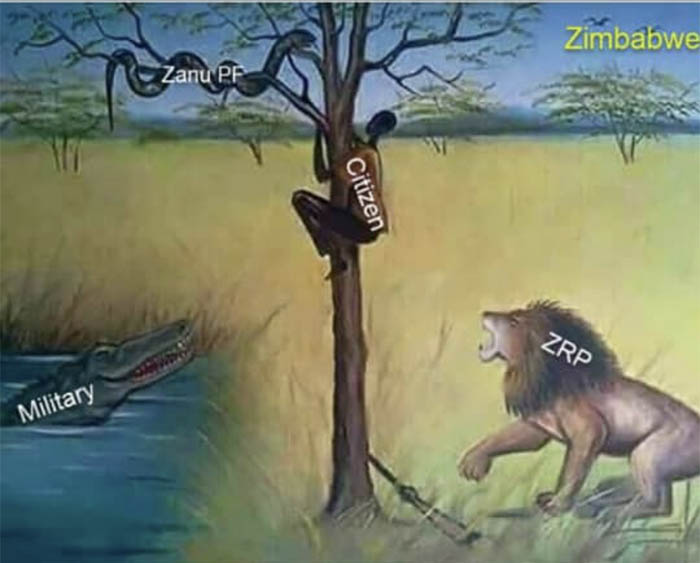 Not even an aorta of lucidity can validate the firing of the much needed 211 medical doctors. The regime’s failure to meet such elementary legitimate demands from under-resourced doctors earning R1000 a month is 100% rubbish and genuine nonsense.

Fools entrusted with serving the lives of patients in Zimbabwe turned the nation’s 1848 hospitals and primary health care facilities into death camps. These counterfeit characters are consistently displaying obliviousness to the mission statements of their offices.

The 60% salary increment which the government offered the doctors is not only irrational, but way below the more than 300% inflation. Instead of preserving such precious services by awarding the striking doctors the 300% salary increment to cushion them from daily galloping inflation, the predatory administration saw it fit to mortgage the lives of poor patients by terminating services of life savers.

Do these leaders have brains or bronze in their heads? Kwanzi naED ‘kana kwanga kunekwainonokogwa mari taindonokora tovapa.’ Ko mari yekutengera madzishe mota vakainokora kupi? Such beerhall statements are unpresidential and serves to confirm that a wrong man is sleeping at the Zimbabwe State House.

It costs Zimbabwe taxpayers more than $1 million to send one student through a nine year medicine training programme. The training is intense apart from being a preserve for the excessively bright students who are talented in science subjects and mathematics.

The political leadership of the new era doesn’t seem to see any value in keeping medical doctors who honed their skills at such a whooping cost to taxpayers. Zvakuri kurasha mvura zvese nemwana.

In any case, these political quacks, rarely step their feet in local hospitals whenever they fall sick. Instead they prefer to be treated in foreign countries anywhere.

One of their own Robert Mugabe met his death in Singapore while the current Vice President Constantino Chiwenga is fighting for his life in China.

Mnangagwa had to be airlifted to Gordon Clinic in South Africa in a comatose state after consuming ‘poisoned ice cream’ in Gwanda a few years ago. Former President John Nkomo also died in South Africa. These chaps surely care less about the local health system which they never utilize anyway.

The patriotic and erudite doctors whose services are required in other countries with better economies like Australia, Botswana, UK and Namibia are not only demanding salary adjustments but provision of basic medical accessories like gloves, bandages and painkillers.

None specialist medical doctors are paid an average of R35k a month in the SADC region and R300K a month in Australia. Can anyone show me any fool in this world who can’t see sense in what the doctors are demanding? UK and Australia have just relaxed Visa requirements for health migrant workers to attract the rare skill.

Shockingly the new dispensation of Zimbabwe which touted itself as a second republic in 2017 when it swept to power through a military coup wants everyone to believe that Zimbabwe medical doctors were worthy R1000 a month. Such a paltry amount is even less than what fulltime house-girls, security guards and waiters take home in South Africa.

Health Minister Moyo, confirmed the rampant catastrophic situations brewing in hospitals, but outrageously went on to sanction the firing of the much needed doctors. Members of the rogue ‘new dispensation’ seem to be entertaining warped priorities.

They have been getting everything wrong since coming into power despite all the bright promises which they spewed seemingly to summon good omens from the auspicious gods of politics. This time they confirmed everyone’s suspicion that these ‘gorillas’ need immediate psychiatric treatment.

I suppose everyone is keen to know what exactly these chaps discuss during their politburo and cabinet meetings. These guys’ priority is war in a time of peace. The Defense Ministry got the biggest chunk of the national budget.

What is clear is that R25 billion will be used to buy bullets, teargas, and tankers instead of medicines. One would expect a contemporary government to finance life preserving facilities and not killing machines. Day in and day out vanenge vachitigadzirira shamhu dzinemunyu?

They don’t seem to be learning anything from their mistakes. The ‘second republic’ banned demonstrations, intensified state abductions, killed civilians on 1 August 2018 and maintained repressive laws.

These ruling monsters are forever limping from one disaster to another. The nation must as well just wait for another mortal hokum from fellows who entrusted themselves with the welfare of the citizens.

Sibanengi Dube is a Zimbabwean journalist based in South Africa

Obituary: Fallen MDC hero Judge Ncube was not a man of positions and power

Sibanengi Dube: Mbeki to grapple with ‘opaque’ objectives of POLAD

Sibanengi Dube: Smuggling legitimacy through the back door is a recipe for a crisis