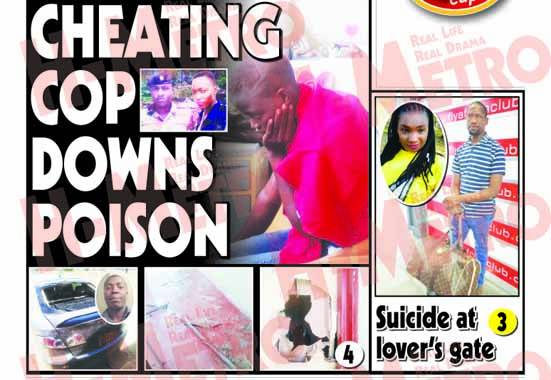 Sibongile Nomsa Mugandani, 25, threatened to hang herself before she downed rat poison when she was caught between the sheets with a suspected land baron Lovemore Mangwende, 35.

Mugandani’s husband Ronald Shiri, a member of the army based in Gweru, was tipped about his wife’s shenanigans by Mangwende villagers and arrived soon after midnight hoping to catch the two. He broke the door to gain entry and caught the two between the sheets.

A fight is reported to have ensued with the two destroying window panes and other properties in the hullabaloo. A pair of scissors, two screw drivers and a bullet were left in the bedroom.

Mungandani’s sister, only identified as Samantha, told H-Metro that Mugandani was saved from hanging herself in their matrimonial bedroom where she was caught defiling the bed and later downed rat poison.

“My sister was attacked by her husband after she was caught accommodating Mangwende in the bedroom,” said Samantha.

“She was saved from taking her life and the rope was left hanging on the beam but she downed rat poison.

“She was rushed to Chitungwiza Hospital but I heard that she is recovering,” said Samantha.

H-Metro visited Mugandani in Ward 2 where she was admitted and confirmed the incident.

Mugandani was also reported to have been assaulted by two illegal money changers two weeks ago after they discovered that she was milking them their cash.

“I do not know the state of Mangwende at the moment but a fight ensued during the early hours when my husband came home,” said Mugandani adding that she was better following the medication she received.

Contacted for comment, Mangwende said Shiri threatened to set the house on fire and was still to receive treatment.

”He went on to deflate all my vehicle tyres and I lodged a police report against him at both Dema and Chitungwiza police stations.

“I could not receive treatment after visiting hospital only to be told that doctors are on strike,” said Mangwende.

Effort to contact Shiri were fruitless by the time of going to print. H-Metro