A 25 year old Bulawayo woman won the Dream Star 2019 finals, pocketing $30 000 after outwitting other 17 finalists at a competitive show. 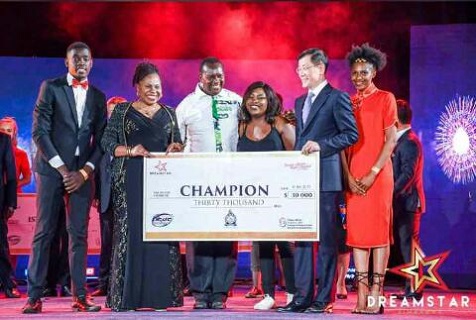 This is the first time a woman has won the grand prize since the talent search’s inception.

In an interview, Monalisa felt honoured to be a historic winner.

“I was not aware that I was the first female winner to take the first position since the six-year existence of the Dream Star show.

“Winning this competition and having to perform in front of a huge crowd is indeed a dream come true.

“I think I am now able to show my face to the world something that I have not done before.

“I am overwhelmed and I hope to inspire some young people out there.,” said Monalisa.

Monalisa, who performed before a big crowd for the first time, expressed her joy.

“I’m out of words, getting to perform for the first time on stage in front of a huge crowd is a dream come true indeed as I had only been used in singing at home.

“It was scary but I managed to gain confident as I had been under a perfect mentorship process during our boot camp from people like Leonard Mapfumo and Sani Makhalima who were my push factors.

“It taught me to do away with stage fright.”

“All I can say to young men and women out there is not to ignore their talent but to consider platforms like DreamStar to show case talents.

“I engaged in DreamStar because there are no Idols, The Voice, there is no Zim got talent it’s just Star Brite and I thought DreamStar is the thing.

“To other people out there who have what it takes to show case their talent, I can say don’t be late, don’t wait to reach 25 like me do it.”