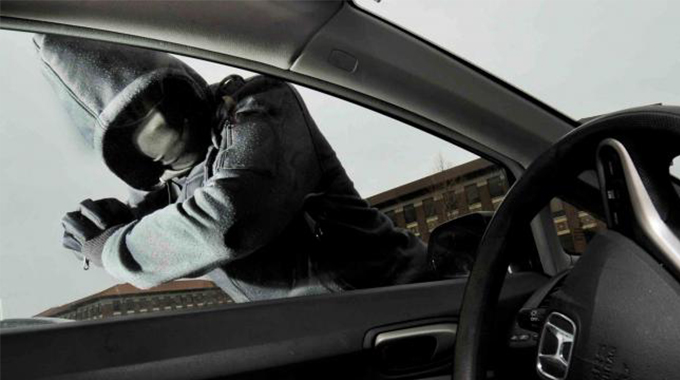 Two men suspected to be behind a spate of thefts from motor vehicles in Bulawayo were arrested after their getaway car collided with a haulage truck during a high speed chase through the city centre on Tuesday.

Thabani Ndlovu (30) and Ronald Chihome (23) who are neighbours in Pumula North suburb have police officers to thank for restraining an angry mob that insisted “they be taught a lesson” before being surrendered to Bulawayo Central Police Station.

Witnesses said the suspects smashed the window of car that was parked along Fife Street between 4th and 5th avenues and stole cigarettes.

“The owner of the vehicle saw them and raised alarm. They threw their loot into a Honda Fit vehicle and sped off with some motorists in pursuit, while some residents followed on foot,” said one of the witnesses.

The witness said the Honda Fit careened into a haulage truck along 5th Avenue.

“The Honda Fit was moderately damaged and motorists blocked the driver as he tried to reverse and speed away. The mob caught up with the thieves as they scrambled out of the car. They rained blows on the thieves who fled into a nearby supermarket,” said the witness.

Vendors told The Chronicle that the mob would not relent and went into the supermarket to drag the suspects out.

They said police officers who were on patrol probably stopped the angry crowd from beating the duo to death and whisked them to Bulawayo Central Police Station.

“I can confirm that we are dealing with a case of theft from motor vehicle where suspects were apprehended and are assisting police with investigations,” he said.

“Their vehicle was towed to Bulawayo Central Traffic at Drill Hall since it was involved in an accident. However, it could be impounded for being a getaway car from a crime scene,” said Inspector Ncube.

Inspector Ncube said the Honda Fit continued to be a nuisance as it was being used in most criminal activities in the city.

He commended police officers for their commitment and visibility in the city which he said helped to react to criminal activities faster.

“We would like to commend our police officers on patrol duty who reacted swiftly when this crime occurred. We also want to appreciate that the complainant had secured his motor vehicle by locking all doors as we advise in our campaigns. Police officers are commended for visibility. This ensures that we are able to serve the public effectively. Clients have called for more police visibility and we are serving. We hope to clear other cases with the arrest of these two men on Tuesday,” said Insp Ncube. The Chronicle