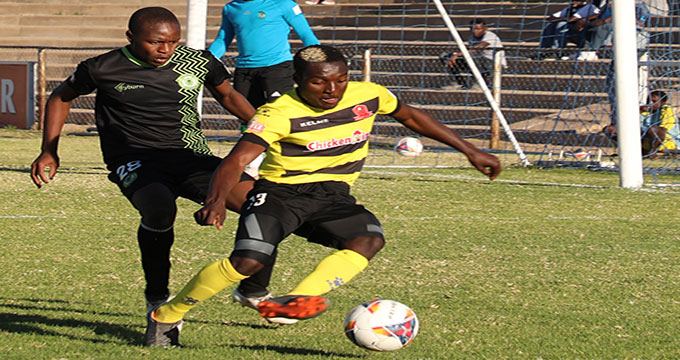 Two second half goals from captain Moses Jackson and midfielder Innocent Mucheneka were enough to give the Gamecocks three points and ensure they keep pace with Platinum, who are two points ahead after beating Chapungu yesterday.

Despite dominating possession, Chicken Inn struggled in the first half to create any meaningful clear cut chances with Chiefs giving them a scare two minutes from half-time as they came close to break the deadlock with a string of chances but it was not to be.

The 2015 champions came back an invigorated side in the second half following the introduction of Clemence Matawu in place of Malvin Gaki. Matawu brought some creativity into the Chicken Inn attack and they were rewarded in the 57th minute when Jackson slotted into an empty net after Chiefs goalkeeper, Liberty Chirava had failed to clear a cross from Mucheneka.

I won’t hesitate to reach out to Ole for tactics: Byo…

Chiefs’ Farau Matare could have levelled the scores in the 62nd minute after he managed to outpace Chicken Inn defenders in a counter attack but his poor effort saw the ball coming off goalkeeper, Donovan Bernard, earning Amakhosi Amahle a corner kick.

Chicken Inn’s forays saw an industrious Obrey Chirinda delivering a pass into the box that Mucheneka met at the far end and he made it two in the 75th minute.

Chicken Inn coach, Joey Antipas was happy with the win that came after a loss to Hwange last week.

“We are happy to bounce back to winning ways after falling to Hwange last week and the win ensures that we keep up the pressure on FC Platinum. The plan is to grind results in our next games and try to hit a consistent cord.

“It (game) was a tricky encounter as Chiefs kept running for the whole 90 minutes and they are a difficult team to play. We were slow in the first half and made a lot of stray passing and we were losing every second ball. Chiefs were much better in the last 10-15 minutes as they created meaningful chances but they failed to punish us.

“The second half was a different story when we introduced Matawu, who stabilised us and was our creative hub,” he said.

Chiefs head coach, Farai Tawachera was of the view that match outcome shows the difference in the quality of players between the two sides.

“I think this is a game that showed that quality will win it for you. It was the quality of the players that made the difference in this game.

“We played well but failed to bury the chances we created but they came up with two chances and they converted them,” he said.

“We were hoping to maintain our winning run after getting maximum points last week. We need to be consistent and win two to three games but the fixture is a bit tight and next week we face Highlanders in another derby.”

‘I was told I would never walk again’… Clive Chigubu on illness, comedy and finding God

I won’t hesitate to reach out to Ole for tactics: Byo Chiefs coach