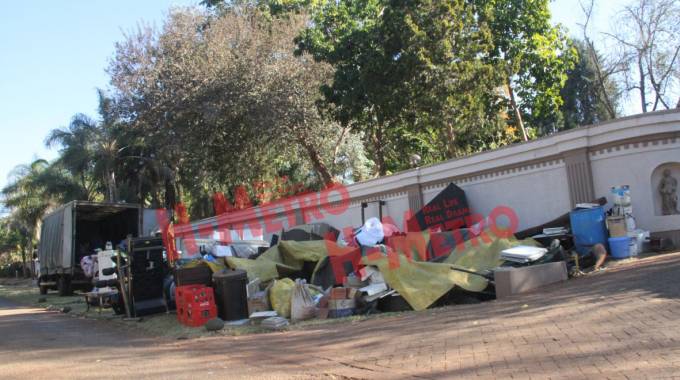 H-Metro witnessed officers from the Deputy Sheriff removing Muteswa’s property from House number 13, Coventry Road with the businessman himself saying he would sleep in the open as he had nowhere else to go.

Muteswa is a household name in places like Highfield, Glen Norah and Chihota where they ran bottle stores among other retail business interests.

“I am worried because I don’t have a place to sleep because they have taken out my property.
“These days it’s cold so ndichatonhorwa and kwekuenda hapana,” he said.

Tuesday’s eviction followed a High Court ruling last year in a case between Casper Masvikeni Family Trust and Elizabeth Tete versus Lawrence Muteswa and The Sheriff of Zimbabwe.

Justice Amy Tsanga ruled in favour of the applicant and ordered that Muteswa or whoever else claiming occupation through him leave the property or be evicted by the Deputy Sherriff.

Justice Tsanga found that the Masvikeni family trust had purchased the property from a sheriff’s sale and were now the rightful owners. 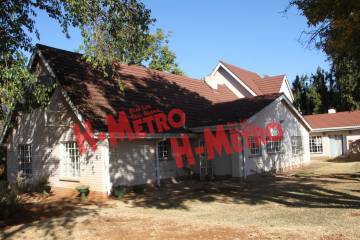 Below is the full judgement:

TL Marezana, for the applicant GRJ Sithole, for the 1st respondent No representation for Sheriff in nominal capacity

In his notice of opposition, the first respondent resists eviction primarily on the grounds that he has a pending matter in the High Court challenging the sale and that until this matter is heard, the second applicant has no right to evict him. Other issues raised by the first respondent relate to the applicants having earlier filed a similar matter said to be pending.

The applicant answered that this matter was withdrawn and as regarding unpaid costs averred that no statement has yet been received to enable it to settle those costs. At the hearing, a point in limine was raised that the resolution authorising the legal proceedings was problematic in that it had not been made by the board of trustees of the trust but by an entity called Oberon Investments.

As such, it was argued that the matter should be struck off the roll since the deponent did not have instructions from the trust. Notably the point was not raised in the notice of opposition and therefore a detailed response as to how Oberon Investments had come to give the authorisation had not been answered by the
2 HH 830-18 HC 4656/18 applicant.

Nonetheless in response to this point in limine, applicants’ counsel drew attention to the case of Mafirambudzi Family Trust HH 334/14 where a similar argument on locus standi was raised and the court narrowed down the issue to whether a trustee of a registered trust, as in this case, had authority to act on behalf of such trust.

On the question of authority, it was held that principles applicable to corporate bodies do not necessarily apply to trusts and that a trustee’s source of authority for bringing an action is the registered trust. Furthermore, applicant’s lawyer pointed to rule 2A of the High Court rules which clothes a trust with power to sue and be sued in its own name. Elizabeth Tete is a Trustee. It is not in dispute that there is a trust deed which is the source of her action as a trustee The trust deed was placed before the court.

The action was brought by Elizabeth Tete, a Trustee. Her trusteeship is not disputed. The point in limine lacks merit and is accordingly dismissed. On the merits, it is an accepted principle of law that a party who buys property and registers it in their name holds real rights.

An application to set aside a sale does not affect the rights of the person in whose name the property has been registered if it has been so registered, as in this case. Such a party who holds registration is entitled to vindicate his rights in the property against unauthorised person who may be in occupation or possession of the property. As clearly explained in Agro Chem Dealers (Pvt) Ltd V Stanley Gomo & Ors 2009 ZLR (1) 255 at p259 (B)

“The registration of title in one’s name constitutes the registration of a real right in the name of that person. A real right is a right in a thing which entitles the holder to vindicate his right, i.e. to enforce his right in the thing for his own benefit as against the world; that is against all persons whatsoever. Another definition of a real right is that it is a right in a thing which confers on the holder of the right an exclusive benefit in the thing which benefit is indefeasible by any other person”.

The seller only remains the owner if the registration is not effected. See Machiva v Commercial Bank of Zimbabwe 2000 (1) ZLR 302 (H).

See also W & D Consultants (Private) Limited v Sean Thomas Nielson Doran HH 551-15. In other words the fact that the first respondent has a pending application challenging the sale under HC 4147/18 for property which has been transferred is neither here not there. It has no bearing at this point on the title for purposes of eviction.

What was also queried as vitiating the sale in this case was the registration of the property on the title deeds in the name of the trust instead of the trustees for the time being in
3 HH 830-18 HC 4656/18 force of the Casper Masvikeni Trust.

In other words, the legal question raised was whether or not the deed of transfer passed in favour of the trust specifically and not the trustees on behalf of the trust makes it void thereby affecting the eviction application at hand. The court was urged to set aside the sale on the basis that assets and liabilities vest in trustees and not in a trust.

Reliance for the core argument that the trust itself is merely a legal relationship and not a separate legal entity like a corporation or universitas was placed on cases such as Crundall Bros. (Pvt) Ltd v Lazaraus NO & Anor 1991 (2) ZLR 125 (S); WLSA & Ors v Mandaza & Ors 2003 (1) ZLR 500 (H); Gold Mining & Miners Development Trust v Zimbabwe Miners Federation 2006 (1) ZLR 174. Since this point of law was raised only at the hearing, the applicants’ lawyer was accorded an opportunity to file supplementary heads of argument on whether the registration of the property in the name of the trust entirely vitiated the sale.

In his written supplementary submissions, applicants’ lawyer argued that it is irrelevant whether or not the name or title is cited correctly because the substantive law is clear that it is the trustees who own the property in the trust.

He has also argued that rectification can be made in terms of s 6 (b) of the Deeds Registration Act [Chapter 20:05] which essentially gives power to the Registrar to rectify in any deed or other document registered whether that error pertains to a name or to the description of any property or conditions affecting such property.

He also argued that in terms of s 8 of the Deeds Registry Act no deed can be cancelled or declared invalid except by an order of the court and that this being an application for eviction, that is the question before the courts and not the validity of the deed which the first respondent seeks to challenge. In other words, the argument is that the issue of the validity of the tile deeds should have been a separate application by the first respondent altogether.

The locus standi of the first respondent to bring such an application is equally challenged on the grounds that he has no claim to the property.

Furthermore, the scrutiny of any deed by the court at this point without giving notice to the Registrar of Deeds at this stage is said to be improper as the registrar is entitled to respond. Moreover, this is a deed which the Registrar is said to have accepted after scrutiny in terms of s 5 (b) of the relevant act.

More significantly it is argued that the issue raised lends itself to rectification rather than cancellation. Attention has also been drawn to the case of Sheriff of Zimbabwe Gara Family Trust & Ors HH 391/16 where MTSHIYA J remarked as follows on a similar argument: “In its opposing affidavit, the Judgment Creditor did not raise any preliminary issues. However, in the Heads of Argument, it then questioned the legal standing of the 1st Claimant
4 HH 830-18 HC 4656/18 and its capability to acquire rights. I did not regard that as an important issue because I believe that a trust can indeed acquire rights and own property”.

These are valid arguments by applicants’ lawyer. The fact that the trust is a relationship and that the trustees are the core players in relation to the trust is true. However, what is significant with respect to sale of property through a trust is that there be a lawful trust with recognised trustees. The family trust in this case was the ownership structure for the purchase and protection of the asset on behalf of the beneficiaries.

The trust is registered. Its trustees are identified. I am in agreement that the issue is one of simple rectification which did not go to the heart of the transfer in anyway. The rectification in terms of this provision has in fact since been easily and effectively made by the Deeds Registry according to correspondence placed before me by the applicants’ lawyers.

This means that the property is now correctly reflected as registered in the name of the trustees by virtue of the rectification. The rectification did not need an order of court. It was a perfectly legitimate rectification in terms of s 6 (b) of the Deeds Registration Act.

Costs have been sought on a higher scale. I am in agreement that costs should be on a higher scale as the trustee has been put through unnecessary expense to vindicate a lawful right to the property. Accordingly, it is ordered that: 1.

The 1st Respondent and all those claiming occupation through him be and are hereby ordered to vacate the applicants’ premises being immovable property No.13 Coventry Road, Greystone Park Borrowdale, Harare measuring 4337 square metres. 2.

Failing which the 2nd Respondent be and is hereby authorised and ordered to eject the 1st Respondent and all those claiming occupation through him from applicants’ premises being No 13 Coventry Road, Greystone Park, Borrowdale, Harare measuring 4337 square metres. 3.