Controversial “snake pastor” Prophet Penuel Mnguni is at it again. Mnguni, of the End Times Disciples Ministries, continues to feed his congregation dog meat as a holy communion. They drink a grape flavoured cold drink as sacramental wine. 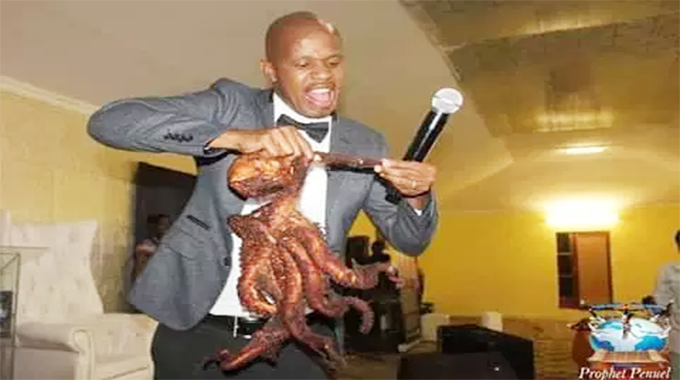 On May 15, Mnguni posted pictures of the event on his Facebook page, where his followers devoured the cooked dog meat during what he mentioned was a Sunday Holy communion service. Among the worshippers pictured, was a toddler carrying a bone.

In another image, a worshipper carries the head of a dead dog. Others depict a dead dog with its throat slit. There are also pictures of uncooked and cooked dog meat in a plastic container.

It is against the law to sell dog meat for human consumption. Contravention of the Animals Protection Act. NSPCA public relations officer Meg Wilson said they were aware of the incident and understood the public’s outrage.

“This is not the only case where an animal is slaughtered for religious or cultural purposes — in fact, farm animals are regularly slaughtered in the name of religion and culture. The question to ask in any sacrificial ceremony is did the animal suffer? If any animal suffers before or during slaughter — it is unacceptable and a contravention of the Animals Protection Act. All animals matter to the NSPCA.

“The NSPCA is only able to work within the parameters of the law — if there is any evidence that the dog was slaughtered inhumanely, or suffered in any way, be it before or during the slaughter, witnesses need to come forward with this in order for appropriate action to be taken,” said Wilson.

In 2016, Mnguni made headlines after images of him driving over his congregants were posted on social media. He is also known for feeding his congregants snakes, hair and cockroaches. – News24

‘Points down the drain’ for Gamecocks