He is risen!This is what billions of Christians across the globe are celebrating today as they commemorate the resurrection of Jesus Christ over 2000 years ago. 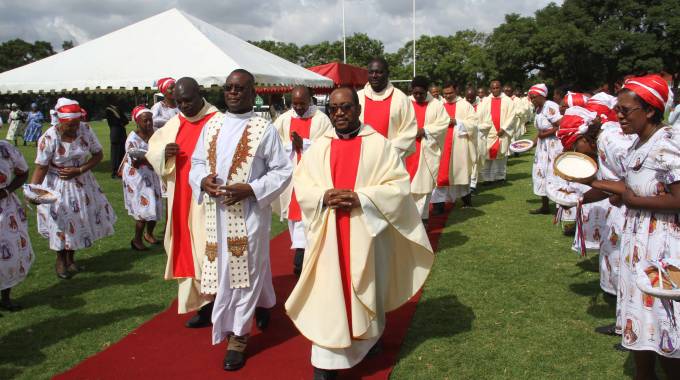 Jesus is the founder of the Church after being crucified on the eve of the Sabbath — on a Friday before coming back to life three days later — as He defeated the power of death and became the first born of the dead.

This was God’s perfect plan to reconcile with humanity after the fall of man dating back to Adam and Eve in the Garden of Eden.

God had to give His only begotten son to cleanse sins of those who believe and confess that Jesus is Lord.

Christians who believe in Easter gather for church conferences as they remember the suffering of Jesus and the supernatural rising from the dead.

GONE TO THE DOGS . . .Snake Pastor’ strikes once more, feeds…

Sri Lanka attacks: More than 200 killed as churches and…

As believers come together in unity at various centres; prayers, praise and worship sessions are the core of the meetings.

Some churches take the opportunity during the Easter conferences to partake of the Holy Communion.

But what really is this Holy Communion, which some people get healing testimonies soon after taking it.

Is it just wine and bread or there is a power behind the scared banquet?

Jesus said the wine represents His blood while the bread is His body; this is what he said on the Last Supper just before crucifixion at Golgotha — the place of skull.

“We take the communion once a year and it’s an important event which is well attended by thousands of people,” he said.

“On Easter Friday, we make confessions led by church prophets who can single out those who would not have fully repented. This is followed by baptisms in a holy stream.

“The church doctrine forbids pork and those who would have eaten it are immersed in water 21 times. After all this, then one will qualify to partake of the Holy Communion.”

City of God Apostolic Church Priest, Rodrick Chiriya, said for Christians should be cleansed by God through repentance prior to taking the Holy Communion.

“Taking the Holy Communion with an unclean heart and sins attract sins. Hence, one must confess and be clean before the Lord,” he said.

“The communion is a renewal of vows with God, therefore after partaking we march into a new lease of life. I Corinthians 5:7-8 says… therefore let us keep the feast, not with the old leaven…but with the unleavened bread of sincerity and truth,” he said.

Bishop Manhango explained that since Jesus washed his disciples’ feet, Christians should be righteous before God during the Holy Communion event.

However, some churches like the Roman Catholic and Anglican churches take the Holy Communion during their Mass.

“The Holy Communion reminds us of God’s grace. This is an integral part of our Christian walk,” he said.

“It can never be done willy-nilly but should be guided by strict Godly conditions.”

Anglicans also has its rules and regulations on how the communion should be eaten. The church’s Father Samtereko explained, “If one does not have white wedding in the Catholic or the Anglican way, they cannot partake of the communion.”

Fr Samtereko said communion was taken at all masses and other special occasions.

“One can be baptised when they are still young but confirmation is done at the age of 12 and that’s when they can partake of the communion. We believe 12 is the average age at which they can understand the Holy Communion because the Bible says one should only partake if there is understanding,” he said.

Easter special: heaven is not our home