Parents have resorted to buying school uniforms from small and informal traders and manufacturers ahead of schools opening on Tuesday as the prices of uniforms in established retailers have gone up by about 100 percent. 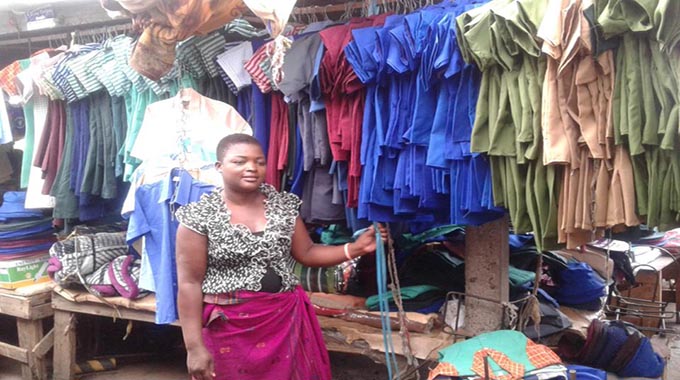 Schools open for the second term this week and apart from school fees increases mainly by boarding schools, parents are also grappling with the prices of uniforms whose prices have gone up sharply. A survey by Sunday News revealed that parents in Bulawayo have instead turned to buying from small traders and manufacturers.

“I went to a known store and was told a jersey for my Grade One boy now costs $45. Here the same jersey, in fact a better and thicker one is going for $20,” said Mrs Emma Moyo who was scouting for uniforms from informal traders on Friday.

Some of the informal traders said they were recording brisk business since last week as more people were opting for their uniforms.

“Some parents bring their fabric and some we provide hence we then negotiate the prices but we can charge as low as $10 per pair of trousers. Some parents also bring samples of school badges and we are able to fix them. It is clear that people now see us as an alternative,” said Mr Bernard Mlilo, who operates near the National Railways of Zimbabwe Station in Bulawayo.

Outcry over spike in uniform prices

Flea market traders who are also ordering their merchandise from South Africa and Botswana have become the alternative for hard pressed parents. Most flea markets in Bulawayo are stocked with uniforms that are cheaper.

As for the leading retailers school jerseys cost an average of S$45 while some school trousers are selling for as much as $50. The director of Esats shop, Mr Hassan Esat, said that the price increase was due to the increased prices of raw materials.

“We have increased our prices because imported raw materials have become expensive. However, we take pride in the shop because we are selling uniforms that are 30 to 40 percent cheaper than other large scale retailers.

“We have not done any advertising but basically we are known to be a cheaper shop compared to other stockers and have been established for many years. That way we can maintain costs and keep our merchandise cheaper,” he said.

Parents said they were worried that this would be one of the most difficult school openings they will face.

“Everything has gone up, from school fees, food and uniforms. The Government has to intervene otherwise as parents we will suffer,” said Mrs Emelda Moyo who said he has three children at school.

The biggest nightmare among parents is that most schools have winter uniforms that are different from summer uniforms so the parents have no alternative except to buy.

“It is like the kid is starting a new year, we are buying new uniforms for winter. We must also buy books and other stationery. I don’t even want to start imagining about the food, bread has gone up, Mazoe has gone up and surely how are we going to buy all these. A packet of potatoes now costs $20 while a tray of eggs is $12,” said another parent who preferred anonymity.

The Government announced that it is planning to come up with price guidelines to ensure that the business community comes up with proper pricing following wanton price increases.

The country has witnessed a spate of price increases that has eroded most people’ earnings. Employers have also been hit hard with frequent requests from their workers to adjust salaries. Sunday News

I’m down but not out: Blot

Outcry over spike in uniform prices