By Mtandazo Dube recently in the UNITED KINGDOM

When a movie, book or television show has tension, big egos, drama, accompanied by stellar performances from the protagonists – it surely attracts loads of attention. 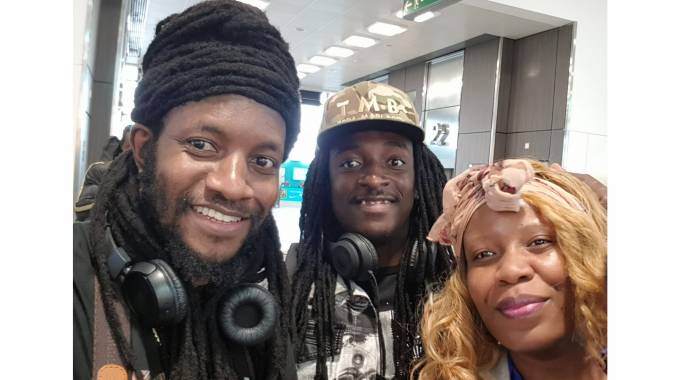 However, no one could have predicted that the Impala SAMA Festival UK, which, thanks to social media, was shown in real time to fans around the world, would be full of so many twists and turns.

Of course, ordinary music fans had their fair share of fun – some of the performances were worth every cent. Some got their selfies with the celebrities, some grabbed the stars a little too hard for comfort while others literally “stole” the men of the microphone – only to bring them back to the airport on the agreed date for a trip back home. It is not clear whether they were playing house, entertaining their hosts’ kids and friends, or simply enjoying the gracious hospitality of pound sterling earners. But that’s none of our business, right.

“You will come back stronger” Jah Prayzah to…

But first things first – the Y2K-organised UK three-city festival lived up to its billing. From London, to Leicester and then Coventry – different crowds turned up and at each show a different dose of pleasure was administered. The headline sponsor, Impala Car Rental, came to the party, oiling the whole tour and drawing favourable comments from both artistes and music fans.

For a company based in Zimbabwe where the economic dynamics can be extremely unpredictable – most people must have thought that Thompson Dondo of Impala Car Rental had lost his marbles sponsoring that event. However, it appears there is a method to his madness.

After all – his company snatched the naming rights to the event. Head of delegation, Impala Car Rental brand marketing manager Tracy Ngoma, said her company’s association with Y2K was a worthy investment.

“For impala the sponsorship is a mass marketing strategy, a means to advertise our brand on a global level and also preservation of brand equity, which has been earned over the last 12 years,” said Ngoma.

Hundreds of thousands of Zimbabweans live in the United Kingdom. The 2001 UK Census recorded 49 524 people residing in the UK who had been born in Zimbabwe. In 2013 that number was put at 110 000 people while recent unofficial estimates of the total Zimbabwean British population, including those born in the UK but of Zimbabwean origin is speculated to be as high one million.

Conservative estimates by community organisations and leaders, however, put the population in the range of 200 000 to 500 000. Among these people are asylum seekers, refugees, labour migrants, students, undocumented migrants, and others who have gained British citizenship. These figures show that there is a huge market to tap into, especially for Impala Car Rental, as the visitors prefer to hire top-of-the-range cars during their short stays in the country when they visit.

Said Ngoma: “Music is a common vessel that brings people together, thus it made sense for Impala to reach out to the diaspora market. The most accessible way of doing this is through sponsorship of shows that are common to Zimbabweans in the diaspora.

“Brand awareness is the major driver for sponsorship for such events and having naming rights is an even easier way to get people to ask questions about who we are. We partnered with Y2K, which has been promoting gigs in the UK for over 10 years and have a reputable history in showbiz.

The vision is to have satellite offices, brand ambassadors and agents that represent Impala in the diaspora to create a seamless and convenient booking process for those that want to visit home and make use of our services. They make their payments in the UK and simply collect vehicles here upon arrival.”

What they said – Winky D

Gaffa or the Ninja President, Winky D, who gave two stellar performances in London and Leicester endorsed Y2K’s events, particularly the just ended festival, as one of the most organised. “Jahman, ndovatorinani ivava. Zvimwe zvatinomboona kuno ma one kani (My friend, these guys are better than all others. Some of the things we have seen here are deplorable),” said Winky D before stopping himself from commenting any further after realising that his comments would be published.

“Ndine vanonditaurira,” he said in jest, before changing the subject.

“I have been here before but this is the first big show that I have attended. It was eye-opening and worthwhile. To see all those people that have been away from home for so long and perform for them was unbelievable. To hear them sing lyrics to every song just does something to the soul.

“I want to thank Y2K, Impala and everyone who was involved in making this event happen. Even my big brothers that I performed with, there is a lot I continue to learn from them,” said Jah Signal, who almost had a bad day in office in London after being slotted after both Winky D and Jah Prayzah.

The “Sweetie” singer had to bulldoze his way to the stage while Jah Prayzah was in the middle of a performance. Jah Prayzah even tried to ignore Jah Signal’s rude gesture but the younger performer knelt on stage and begged for a chance to play as venue closing times were approaching.

In the UK they have strict adherence to time – while Jah Signal finally got the chance to sing a few songs, the police were ready to forcefully shut the show down. It appears the duel of the two Jahs (Signal and Prayzah) is far from over.

Like Jah Signal he played at all three shows. They say “akarombera UK”, meaning he has acquired juju just for the UK market. They love him there. The things some women in the audience were doing (to themselves) while he was performing are unprintable.

It got worse when he got off the stage. He was groped, forcibly kissed and so forth. He could have really used some security at the shows but it appears no one thought that the “highly regarded and civilised” UK-based Zimbabweans could be that gross.

That aside, Tocky Vibes aka Chamakuvangu, had the best slots, exhausting his initial playlist at the London show while keeping music lovers on the dancefloor throughout his performance. Playing just after Baba Harare. He played the longest time as the other superstars, Winky D and Jah Prayzah, delayed coming to the venue as the politics of who would play first or is it last got in the way.

In fact, there was drama just after Tocky had finished. Ezra Tshisa Sibanda had initially planned that Jah Prayzah plays first and Winky D soon afterwards.

However, as Jah Prayzah’s boys prepared to go on stage, their boss was nowhere to be found. Having previously suffered the humiliation of being at the wrong end of missile throwing after Jah Prayzah had delayed coming to the stage by close to 30 minutes while the band was already playing – they resisted. Winky D and his boys, who were being marshalled by Mwalimu Jonathan Banda himself, the Vigilance Band manager, seized the opportunity and went on stage first. It was never going to end well – no wonder Jah Signal got a raw deal and ended up invading the stage.

He varnished at Gatwick Airport upon touch down only to reappear at the Royal Regency in London for his slot. Baba Harare is responsible for delaying the London programme as his hired UK-based session instrumentalists turned up late. One of the band members, a former Utakataka Express drummer, Paul Kuzinya, actually made things worse when he appeared to be in a drunken stupor.

“I have tried everything. I have given him water but the guy just won’t come to life. I need him to wake up and play,” complained stage manager Ezra Tshisa, who handled the show remarkably.

According to Baba Harare, however, the guy may have been drinking but that was not the issue. “Mari dzanga dzisati dzabuda, anga achida bag rake (he just wanted his money first),” revealed baba Harare.

On stage with the “The Reason Why” singer was another former Utakataka Express singer Alouis Machapu, former Jah Prayzah dancer and vocalist Generator, and guitarist Mashasha. They never rehearsed with Baba Harare – he simply sent them his playlist and they met on stage. In all fairness – they delivered.

Even Baba Harare himself was overwhelmed: “I never thought that the crowds would respond to my music like that. I loved every moment and would like to thank the organisers for putting their faith in me,” he said.

The Star FM presenter who was accompanied by his “partner-in-crime” KVG, said he was just happy he had gone to the UK not as a beggar but on tour doing what he loves.

“We are selling brand Zimbabwe out there. People should know that we come here proud to be Zimbabwean, our jobs and the brands that we represent. I’m dressed by 4 May, and Zimpapers through Star FM is the reason I’m here. So, from Impala, 4 May, Zimpapers, Star FM, 3-2-6 Express – we are promoting Zimbabwean brands,” said Sibanda, who is variously referred to as Shumba Pazvese, Mkwasha Mboko and Mashuga.

There was no shortage of drama. The organisers, who also include Express Links Money Transfers – had done their homework. The Saturday show at the Ramgarhia in Leicester had the most attendance. Stage-wise it was more organised.

Special mention goes to Y2K Entertainment Executive Director Fredrick Freddie Matenga and his business partners for being such mature grownups, otherwise they would have refused to upgrade Jah Prayzah’s economy class ticket when he snubbed the first plane booked for him.

A big up to Winky D whom we travelled alongside in the same economy class despite having had the same bargaining power as Jah Prayzah but saw it not wise to play that card.

Yvonne Chihera, the Leicester-based lady who prepared meals, for free, for over 50 people at her house is a wonder woman – so full of love. Thank you Chihera. The drivers Shumba 1 and George, the Manchester-based boys that chauffeured the teams around in their sleek black Mercedes mini buses – were awesome.

Belinda Magejo, the run-around lady, who was there at the airport to receive the artistes, was visible throughout their stay and saw them off at the airport – is an asset for any event organiser. Belinda, your energy did not go unnoticed. Jordan Link, Jah Signal’s stand-in manager after Hillary was denied a visa – you did a splendid job. Sunday Mail

Hopewell Chin’ono: Wamba heading for an uncontested congress victory: But what does it mean?

“You will come back stronger” Jah Prayzah to jailed Fantan & Levels