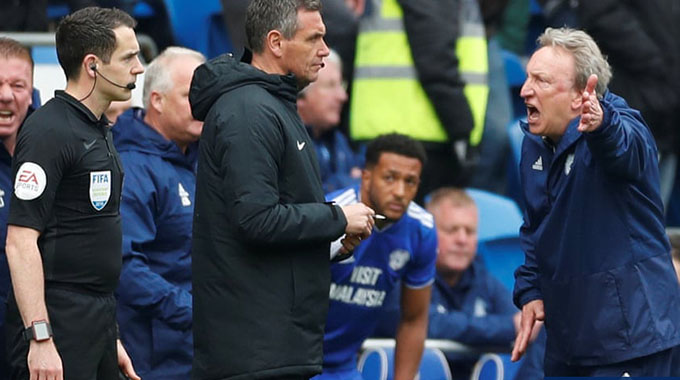 Ponderous and painfully slow, Chelsea controlled possession but did little with it as they were comfortably shackled by a disciplined Cardiff side during a goalless first half. The hosts took the lead less than a minute into the second period thanks to Victor Camarasa’s delicate curling volley, prompting cries of “we want Sarri out” from Chelsea’s travelling fans.

With five minutes left, Cezar Azpilicueta nodded in an equaliser from a clearly offside position and then, in added time, substitute Ruben Loftus-Cheek headed the winner to break Cardiff hearts.

The result is a major blow to Cardiff’s bid for Premier League survival, leaving them five points adrift of safety with seven games remaining. For Chelsea, however, it is a major reprieve for their hopes of securing Champions League football next season, keeping them within a point of Manchester United in fourth place.

And nobody will be feeling more relieved than Sarri after he faced repeated calls to be sacked from the travelling supporters. The Italian was already under pressure before this match, with a run of four defeats from five away matches and fans growing frustrated with the patient, arguably overly pragmatic style of football known as ‘Sarriball’.

They vented their anger on several occasions at Cardiff City Stadium, and justifiably so given their side’s largely toothless display.

Sarri had decided to rest two of his most important players, Eden Hazard and N’Golo Kante, who both joined Callum Hudson-Odoi on the bench despite the clamour to hand the 18-year-old winger his first Premier League start following his impressive recent debut for England.

Hazard’s creativity and Hudson-Odoi’s dynamism would have been useful for Chelsea in a sterile start to the game, as they dominated possession but at a walking pace.

Once again, Gonzalo Higuain cut a forlorn figure up front, dropping deep in search of the ball and often outnumbered by Cardiff’s swarming defence.

Added to that, there was no penetration from a midfield three of Mateo Kovacic, Ross Barkley and Jorginho, whose second-half substitution was met with ironic cheers from the travelling supporters.

But it was Sarri for whom they reserved their most stinging vitriol, mocking ‘Sarriball’ and demanding the Italian’s sacking in a string of furious chants.

Chelsea’s players pressed forward in search of an equaliser as the second half wore on, but there was little conviction or genuine threat against a Cardiff side who had conceded 57 goals in their previous 30 matches.

That was until the 84th minute when Marcos Alonso flicked on a cross to Azpilicueta, who was a foot offside but allowed to head in from close range, much to the rage of the Cardiff crowd.

A draw would still not have been much use to Chelsea’s hopes of a top-four finish, and they got their full reprieve when Willian swung an injury-time cross to the back post, where substitute Loftus-Cheek headed in powerfully to spark celebrations in the away end — and a huge sigh of relief from Sarri. — SuperSport

Gweru MDC MP who claimed Chinyoka assaulted him agrees to…