Award winning Hip-hop star, T.Gonzi, was recently kidnapped by thieves and later dumped in Hatfield on his way to a friend’s house. 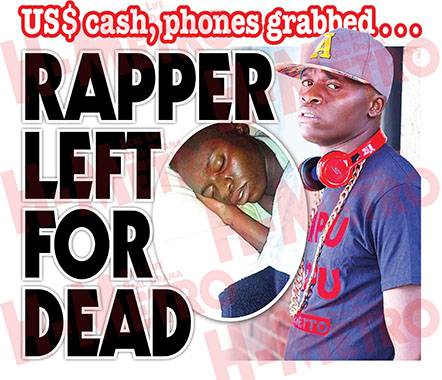 It has been confirmed that T.Gonzi and his friend Ado, were coming from Oskid’s studio at ZiFM going home around 7pm when they were attacked by robbers.

When H-Metro contacted T.Gonzi’s manager Tinotenda Taonera, he confirmed that the reports were true and explained what happened to the two.

“T.Gonzi and Adoc were coming from Oskid’s studio in Newlands when they were dropped in town safely.

“T.Gonzi lives in Waterfalls but unfortunately couldn’t find a kombi to go home so he was forced to go and sleep over in Norton at his friend’s house, Adoc.

“The two boarded a Honda Fit at Total service station along Samora Machel Avenue in the Central Business District.

“Just a few kilometres from town, the thieves who were in the car brought out knives and demanded phones from the victims.

“They took the phones and US$200 dollars from T.Gonzi,” said Tinotenda.

Fortunately, the Honda Fit was now a well-known car by people who board taxis to go home by Total Service Station, so they had already tipped the police.

“The thieves noticed that the police were following behind and decided to stab Adoc and throw him out of the car for distraction.

“Adoc was found by the police and taken to the station as a suspect for questioning and later released after the police verified the facts.

“T.Gonzi was stabbed in the head and has bruises all over his body as they dragged him and dumped him in Hatfield where he was later found.

“He was found in pain by a woman who took him to her house and informed the police.”

T.Gonzi is currently at a local hotel where he was admitted on Tuesday evening and is slowly regaining consciousness.

His mother and sister, they confirmed that the information was true but they had not yet seen him since the incident. Only his wife has been allowed to see him.

“His wife went to see him yesterday (Thursday) and is currently at the hospital, he can now recognise people but moans about pain from his back.

“I am going for the afternoon visit, that’s when I will be able to see him,” said Lisa.

When H-Metro spoke to Oskid he said he wishes him a quick recovery.

“I was surprised when I received a call from the police yesterday asking about him, I haven’t seen him yet.

“He had just recorded a song and it would make me happy if he lives to listen to the final project.

“I hope he gets well soon,” said Oskid. H-Metro

‘She failed to give me a male child’