A Bulawayo businesswoman, whose 15- year-old son ganged up with an accomplice and allegedly robbed a United States-based student of $35 on Christmas Eve at gunpoint, was yesterday fined $100 or 30 days in jail for failing to secure her firearm. 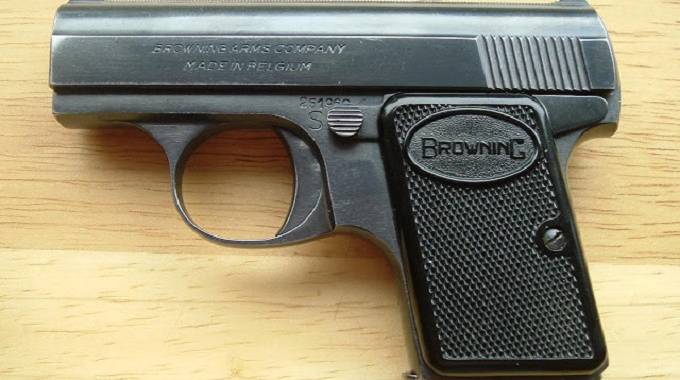 The mother (48) of Pumula South, who cannot be named to protect her minor son, was convicted on her own plea of guilty to failure to secure a firearm in violation of section 28 (2) of the Firearms Act by Bulawayo magistrate Mr Tinashe Tashaya.

Prosecuting, Mr Alfonso Makonese said on December 23, the businesswoman, a licensed firearm holder of a .6, 35 FN Browning pistol, locked the firearm in a cabinet before she left the keys at the disposal of her children.

The pistol was loaded with four rounds of ammunition.

On December 24, her son stole the pistol and allegedly used it in the commission of an armed robbery at Bradfield Shopping Centre.

A report was made leading to her arrest.

Meanwhile, her son appeared in court for armed robbery.

The court heard that the boy who is in Form Three at a local school hatched a plan with his accomplice who is still at large to go around Bulawayo robbing people using the firearm. The schoolboy who was being represented by Mr Tinashe Runganga of Tanaka Law Chambers appeared before Bulawayo magistrate Mr Franklin Mkhwananzi on Christmas Day, who remanded him on free bail into the custody of his mother to January 11.

Prosecuting, Mr Leonard Chile said at around 5AM on Christmas Eve at Bradfield Shopping Centre the boy and his accomplice pounced on the hitch-hiker.

“Allegations are that on December 23 at around 1PM the minor child took advantage of his mother’s absence and got her gun. He teamed up with his accomplice and hatched a plan of going around robbing people,” said Mr Chile.

“The next day on Christmas Eve on December 24 at around 5AM the two alleged robbers proceeded to Bradfield Shopping Centre where they approached the complainant Mr Leroy McDonald of Malindela suburb who was intending to get lifts into town.”

The court heard that the two teenagers pretended to be looking for transport. They allegedly asked Mr McDonald for time but before he could respond the 15-year-old produced a gun demanding a cell phone and money.

“Mr McDonald responded by producing $35 bond. But before he handed it over, a pirate taxi emerged, prompting the accomplice to snatch the money from Mr McDonald. They both ran away and were chased by the taxi passengers who apprehended the 15-year-old,” the prosecutor said.

The 15-year-old was handed over to the police and the gun was recovered. The boy’s alleged accomplice is on the run and Mr McDonald’s $35 was not recovered. The Chronicle.