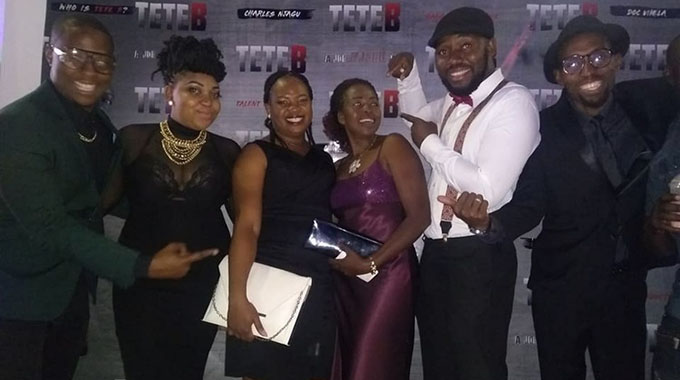 In the film Charles Njagu plays a happy detective, Mbada who is married to Mamoyo (Nhongonhema).

All hell breaks loose when Mbada discovers a text message in his wife phone about a steamy affair.

He calls his friends to help him solve the mystery and does not know that his wife has had affairs with all his friends.

The director did a good job in keeping the viewers in suspense and the cinematography was on point from camera movement, lightning and sound effects.

Doc Vikela temporarily hanged his comedy boots for the big screen, but brought his comic stunts to the production

Renowned actor Sandifolo also proved he is the guru in the industry as he sailed flawlessly while a surprise act was Charles Njagu, known for his chummy smile in real life, managed to portray a serious guy.

Nhongonhema, the lonely leading actor in the film also dominated provided she was flanked by film

However, some film critics said Njagu might have borrowed the concept idea from the 2014 mystery drama ‘The Loft’ by Erik Van Looy which stars Karl Urban, James Marsden, Wentworth Miller, Eric Stonestreet and Matthias Schoenaerts.

But there are many differences between the two movies.

In an interview, film critic Nelisiwe Nhare of Sam Levy Village Ster Kinekor movie theatre, she said the writer managed to capture what is happening in the society.

“Thumbs up to the director and his crew. The issues presented in the movie are real. It is actually happening and there is no need to deny it. Mbada character that was brilliant but family issues are not solved with a bullet. I hope this is a sequel because everyone wants to know what then really happened afterwards. The production had good lightning, good script and sound,” she said.

Njagu said was happy with the turnout.

“The film is already on Vimeo and I am happy to announce that next month it will be on Zambezi Magic. Our budget was limited as it was done on friendly basis with support from Gango ProductionS,” he said. The Herald

Mhofu goes for the big guns