It was almost like a homecoming this past week as flamboyant preacher/businessman Uebert Angel travelled to Nigeria for a “Global Finance Conference” where he met and spent some time with popular Nigerian televangelist, Chris Oyakhilome (Pastor Chris), the founder of Christ Embassy. 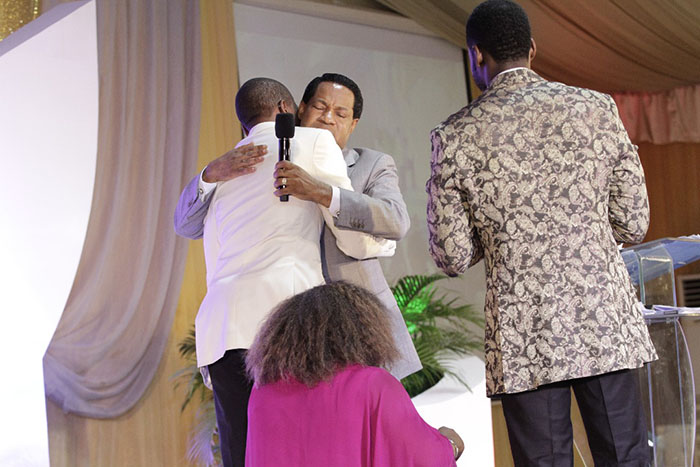 Unknown to many, Pastor Chris played an inspirational role in the formation of Uebert Angel’s Spirit Embassy church in 2007. In 2005 during New Year’s Eve, Angel and his wife Beverly, were watching Pastor Chris’s New year Message on television and the seeds were immediately sown.

To understand this, you would have to go back to a 2011 birthday magazine interview where Angel listed American preacher Kenneth Hagin as his spiritual father. After the death of Hagin in 2003, sources claim Angel sought a new mentor in lieu of meeting Pastor Chris.

Below is the full message from Uebert Angel posted on his instagram page:

“My level of indebtedness, honour and love to and for this man, pastor CHRIS OYAKHILOME, is beyond my ability to articulate and even my own comprehension. It is then of paramount importance that it be known that Pastor CHRIS OYAKHILOME is not a man I call a ‘friend’ but a mentor, a life coach and a ‘father figure’ because calling such grace a ‘Friend’ is tantamount undoing all of my spiritual dignity and integrity.

“It should also be noted that my secret all these years has been understanding Levels of grace in men that have made a mark for Christ that no man can erase and appreciating and acknowledging their contribution to Christianity without putting into visibility my own giftedness or sharpness in the prophetic or revelatory style of my teaching ministry and to add to the list my God given business acumen which is but a few years in the making due to my age and level of grace versus a man who has been in the Lord for years and has taken vast territories for the kingdom…. you see I respect ‘ancient oil’.

“I have also learnt through the years that God’s grace on a person is beyond any gift or any position they may occupy and I have also learnt never to be moved by what people think or say so with that in mind, Pastor CHRIS OYAKHILOME is an inspiration and one of those few men I can submit to be laid hands on and him inviting me to visit with him and to preach and prophesy at the GLOBAL FINANCE CONFERENCE was and still is an honour I never expected to be granted any more than I expected to be the first man to land on the moon & for him to lay hands on me and decree what he decreed upon my ministry and my life is an honour BeBe and I will cherish for eternity.

“We love PASTOR CHRIS OYAKHILOME and without reading between the lines we encourage you to visit our literature to know how Spirit Embassy started and who apart from the Kenneth Hagin’s teachings and covering had the greatest impact of any man in my life and also hear who was the man that prompted the genesis of Spirit Embassy as a ministry and when you do you will realise my love for Pastor Chris is not something I got excited with yesterday or yesteryear but a revelation I lived by for so many years so this is not a new direction but a clearly followed path we decided to make public this 2018 Year of the Pillar of Fire where we are following the Cloud and not the crowd.”