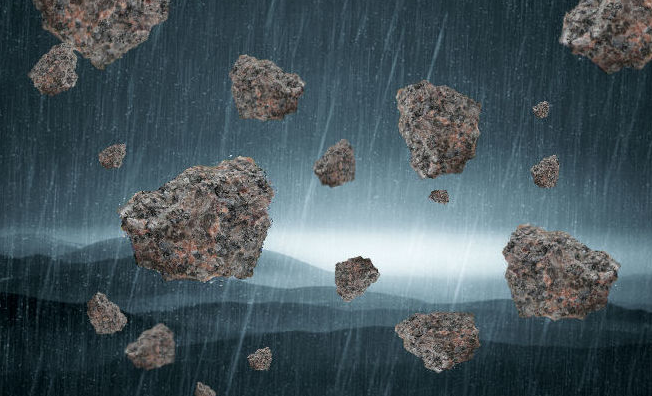 A Chinhoyi family is living in fear and anguish as mysterious stones from invisible sources rain on them inflicting injuries and damaging property.

Initially, the stones targeted family members and started at 20.08 hours every night but the attacks are now frequent.

The audible claps and pinching often result in people fainting for up to three hours.

The Herald visited House No. 4146A, Chikonohono suburb in Chinhoyi where these mysterious happenings have been witnessed.

Heaps of stones including half bricks, broken window panes and asbestos sheets are strewn around the house.

Mrs Tabitha Chiviru narrated the family’s ordeal, which started on May 9 this year.

Her 22-year-old daughter, Concilia, was the first victim after she was hit by small stones on two occasions.

The stones got bigger with time.

The family now has two sacks of stones whose source is a mystery.

“Because of the frequency of the attacks I have come to understand that some wind often precedes the attacks. Currently, the attacks are mostly targeted at my 19-year-old daughter,” said Mrs Chiviru.

Prior to the attacks, the family would find a bag full of clothes on their yard.

The last born, Shamiso (19), is attacked more frequently and loses consciousness whenever it happens.

In some instances she reveals the identity of the family’s tormentors in a trance.

The father, Mr Phillip Chiviru (55), has also been at the receiving end of the attacks which have seen him seeking help from apostolic sect prophets but to no avail.

“I do not know what wrong I have done to deserve such pain and mysterious occurrences in my family. We would like to appeal for anyone who can help but from the manifestations of my daughter and previous experiences, this will need someone strong,” he said.

In a bid to avoid the attacks on her daughter, Mr Chiviru tried to create a buffer around her one day using 3,6 inch metal sheets.

That did not help as two stones managed to penetrate the main roof and the metal sheet giving off a thunderous sound.

“I thought I could protect my daughter in the hope that when the stones penetrate the roof they would land on the metal sheet and avoid her. However, two stones hit her and she fainted and when I looked at the sheet, there were two footprints, the size of my small finger,” he said.

Doors, windows and walls are pounded like someone is knocking with strong force.

Some window panes have been broken, while doors have been loosened from their hinges.

Strangely stones penetrate the walls, roof and windows, sometimes without living a mark.

Neighbours confirmed hearing strange noises like someone is banging doors.

At times clothes are mysteriously found outside.

“The occurrences at this house are quite strange. People are being attacked by stones which has resulted in us fearing to visit the house,” said a neighbour.

At one time, the family called apostolic faith prophets who performed rituals to cleanse the house.

However, a clay pot they had buried in the ground was found at the doorstep the following morning.

When they surveyed the yard, they found a large hole the size of the clay pot.

At times when the family prepares a meal, it is filled with human waste.

Shamiso is always escorted by her family even to visit the toilet as she is attacked whenever she is alone.

“We ensure that she is not alone at any given time because any moment she is left alone, she is attacked. When it happens something forceful like a snake moves inside her stomach almost as if to squeeze her heart and lungs. So we move quickly to block it. It is a real battle,” said Concilia, a sister to Shamiso.

Mrs Chiviru said she believes in prayers, which have helped calm the situation.

Some elders from a local church went to the house to offer prayers but left in a huff after they were hit by stones. Shamiso could not finish her education because of the attacks. The Herald