Giants Dynamos finally remembered how to win yesterday when they edged bitter rivals CAPS United in a rain-drenched Independence Cup semi-final soccer tie at the National Sports Stadium to set up a dream date against Highlanders. 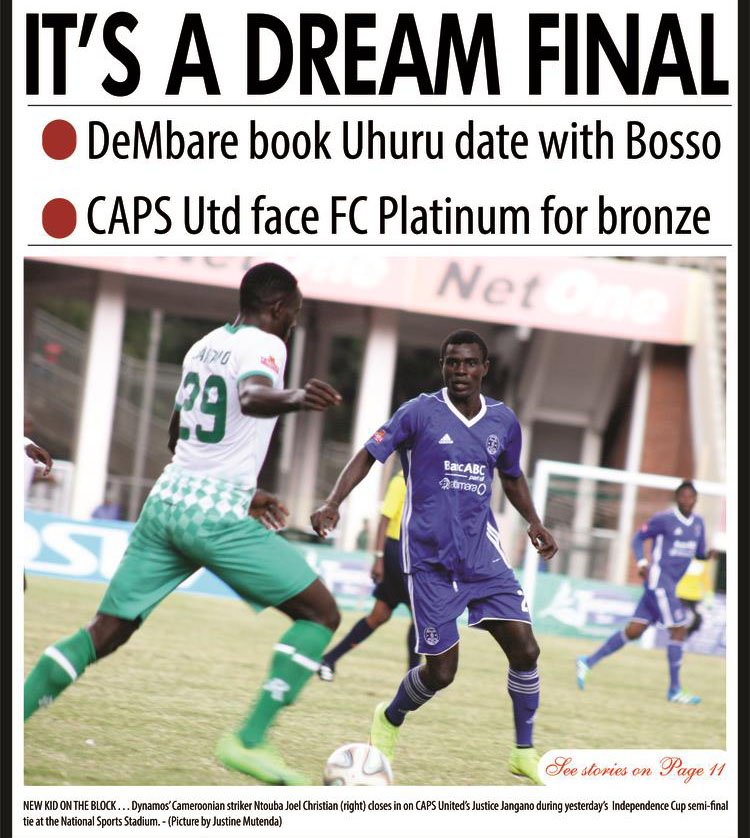 The Glamour Boys, who had characteristically started the season in low gear, badly needed t0 win the match to boost confidence and prop up their campaign.

But there will always be the debate as to who scored the DeMbare goal after Cameroonian newboy Ntouba Christian Joel appeared to have headed Ocean Mushure’s free-kick into the back of the nets but the referee had the skipper on their books.

The game, however, could have had a different complexion on another day as CAPS United missed a golden opportunity to take the lead from the penalty spot after Ronald Pfumbidzai crashed his shot against the woodwork at the nick of half-time.

Makepekepe then went on to finish the match with 10 men after Valentine Musarurwa was shown a straight red card following a crude tackle on Takunda Sadiki.

But the numeric advantage didn’t really show as Makepekepe fought hard for every ball on a surface that was rendered difficult to play on by the heavy rains that pounded Harare late in the afternoon yesterday.

Still the win could have been what the doctor had ordered for both Dynamos and the organisers of the Uhuru Cup.

Highlanders grabbed the other slot in the final when they edged FC Platinum 4-3 in a penalty shootout after featuring in a goalless match in the other semi-final at Barbourfields.

But for DeMbare coach Lloyd Mutasa, the win over Makepekepe was crucial for a side that is crying for positives in their rebuilding exercise.

Mutasa, who was highly animated on the touchline despite the rains which got worse during the second half, was a happy man after registering his first win with his new-look side in a competitive match which he believes could bear significance on their fortunes.

“It was a tough game. You know the matches between Dynamos and CAPS United are never easy and this one was not exceptional.

“It feels great to win but I think it never came on a silver platter. The youngsters gave it a fight and you could see that it was only that goal which separated the two sides. It was a closely contested match and I hope it will give us confidence going into our next fixture.

“During our team talk in reference of this game we told these guys that this is going to be our turning point. CAPS United have always been our bogey side, they have beaten us and last year we never won a match against them. So probably if we beat CAPS United then we would be able to stand the heat against the other sides in the Premiership,” said Mutasa.

DeMbare yesterday had much of the ball in the early parts of the game with new acquisition Quality Kangadze giving the CAPS United rearguard all sorts of problems.

Kangadze is proving to be a worthy signing for the Glamour Boys with each passing game but yesterday he could not last the distance after suffering a muscle injury.

Mutasa was made to make two injury-inspired substitutions after Kangadze and midfielder Denver Mukamba limped off the pitch with a little more than half an hour played.

Makepekepe took control of the game and could have gone to the breather leading when referee Thabani Bamala pointed to the penalty spot after Phineas Bamusi was felled inside the box by Elisha Muroiwa.

Pfumbidzai stepped up to send the goalkeeper Tonderai Mateyaunga the wrong way but he was denied by the upright much to the relief of the Glamour Boys.

Makepekepe still played with authority and Tafadzwa Rusike nearly got the breakthrough soon after the interval with a curling shot which needed Mateyaunga to summon his brilliance.

Rusike was probably the best man on show and could count himself unfortunate after his deflected effort in the first half had beaten all in the Dynamos defence except the woodwork.

But if anything, Dominic Chungwa was the ‘Fall Guy’ in the Makepekepe dressing room yesterday after missing some good chances, including a sitter which he somehow scooped wide in a goalmouth melee.

With the rains increasing, the second half was rendered difficult because of the pools of water forming on the pitch which made the flow of the ball unpredictable.

DeMbare still found the priceless goal from a set-piece taken wide in the right by Mushure.

Makepekepe players were beaten by the bounce of the ball in a crowded box.

The Glamour Boys will be back at the giant stadium tomorrow for the final against Highlanders while CAPS United travel to Bulawayo to meet FC Platinum in the third-place play-off at Barbourfields.

“I thought it was a very good game. The application from the boys was out of this world. On another day it could have been much better. The result does not match the performance but overall I am happy,” said CAPS United coach Lloyd Chitembwe.