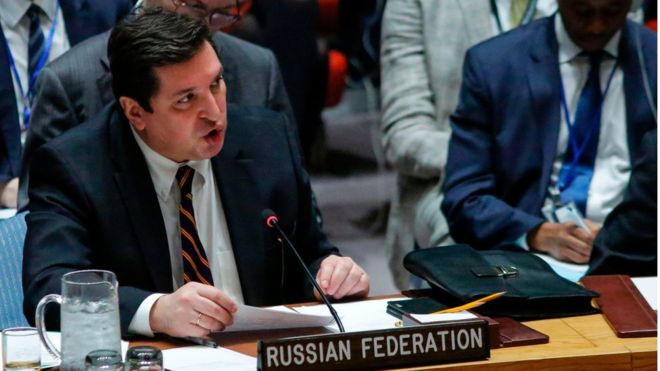 Russia has vetoed a draft resolution at the UN Security Council that would have condemned last week’s alleged chemical attack in Syria and demanded that Damascus cooperate with investigators.

The resolution was presented by the US, UK and France, who reacted angrily to Russia’s decision.

It was the eighth time Russia has protected its ally at the council.

Western allies blamed the Syrian government of Bashar al-Assad and US President Donald Trump ordered missile strikes against a Syrian air force base in response.

The proposed resolution would have backed an investigation on the ground by the Organization for the Prohibition of Chemical Weapons.

The Syrian government would have been told to provide military information, including flight logs, from the day of the alleged attack, and provide access to air bases.

It denies it is responsible.

China – one of the five permanent Security Council members which hold veto power – abstained from the vote, as did Ethiopia and Kazakhstan. Ten other countries voted for the resolution, and Bolivia joined Russia in voting against it.

US Ambassador to the UN Nikki Haley condemned Russia’s action: “You are isolating yourselves from the international community every time one of Assad’s planes drop another barrel bomb on civilians and every time Assad tries to starve another community to death,” she said.

In Washington, at a news conference with the Nato secretary-general, President Trump was asked by the BBC’s Jon Sopel if he thought it was possible that Syrian forces could have launched the alleged attack without Russia knowing about it.

“I think it’s certainly possible. I think it’s probably unlikely,” he said. “I would like to think that they didn’t know, but certainly they could have. They were there.”

He also said it was “wonderful” that China abstained at the UN, but, mentioning that he spoke with Chinese President Xi Jinping the previous night, said he was “not surprised”.

China has vetoed six resolutions on Syria since the conflict began in 2011.

Earlier Russia’s President Vladimir Putin rejected allegations that Syria was behind the chemical attack, saying Syria had given up its chemical stockpile.

Mr Putin, speaking on Mir television, also said trust had “deteriorated” between the US and Russia under the Trump presidency.

US Secretary of State Rex Tillerson echoed those comments, saying ties with Russia were at a low point and must improve.

After two hours of talks with Mr Putin and Foreign Minister Sergei Lavrov in Moscow, he said that the “two foremost nuclear powers cannot have this relationship”.

After the UN vote, UK Foreign Secretary Boris Johnson said Russia was “on the wrong side of the argument”, while French President Francois Hollande said it “bears a heavy responsibility” for continuing to protect Mr Assad and blocking a united international response.

But Russian Deputy Ambassador Vladimir Safronkov told the council the measure was “doomed” from the beginning.

“The outcome was pre-determined because we have consistently expressed our categorical disagreement with the content of the document,” he said.

Russia has called for an independent international investigation, and questioned how Western powers could have assigned responsibility for what happened so quickly. BBC News