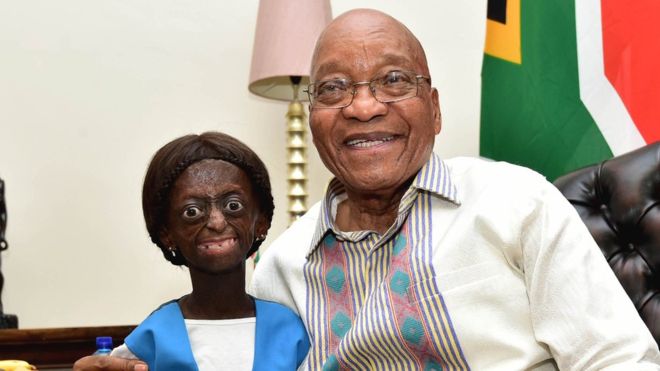 A woman who captured the hearts of many South Africans for her brave battle against premature aging disorder progeria has died aged 18.

Doctors had said Ontlametse Phalatse would not make it past the age of 14.

President Jacob Zuma was among those who conveyed their condolences to the family of “the special child of South Africa”. She was known as the “First Lady” by her friends and family.

Local broadcaster Enca called her the country’s “champion of positivity”

In a tribute her family wrote: “We will miss you sorely, Tsontso, our first lady. May you find eternal peace among the angels. Rest in Peace”.

Zuma vs Ramaphosa: Legal battle set for January 10 in High…

Zuma Foundation insists it has a legit certificate to…

She called herself the first lady because she was the first black woman in South Africa to be diagnosed with progeria.

Ontlametse loved life, lived it to the full, and never wished that she was born in any other way.

This is what South Africans will remember her for.

She rose to prominence a few years ago when a documentary was made of her life.

Ms Phalatse used her new-found fame to motivate people to get on with their lives. In the process, she touched the hearts of many South Africans.

The country got to share in some of her special moments and milestones – her 16th birthday, a school graduation ball and more recently her 18th birthday party spent with President Jacob Zuma.

Ontlametse died surrounded by her family, who described her as having a “courageous spirit”. Her legacy at 18 is not taking life’s precious moments for granted.

President Zuma led a minute’s silence for Ms Phalatse on his 75th birthday and said he had planned to give her a car.

“A brave young fighter has fallen. May her spirit inspire all others living with disabilities or facing any difficulty, to soldier on as she did and live life to the fullest. We are really proud of her,” he said in a statement. BBC News

Zuma Foundation insists it has a legit certificate to prosecute Ramaphosa