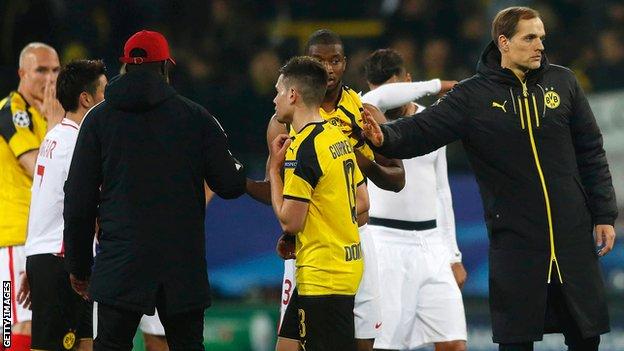 Dortmund lost 3-2 in the first leg of the quarter-final on Wednesday, less than 24 hours after an attack on their bus caused the match to be postponed.

“We were told by text message that Uefa was making this decision,” said Tuchel.

“A decision made in Switzerland that concerns us directly. We will not forget it, it is a very bad feeling.”

Following Tuchel’s comments, Uefa released a statement saying the decision to play the match at 17:45 BST on Wednesday was made in “complete agreement with clubs and authorities”.

European football’s governing body added: “We were in touch with all parties today and never received any information which suggested that any of the teams did not want to play.”

Three explosions hit Dortmund’s team bus as they travelled to their Westfalenstadion home on Tuesday, with the match rescheduled later that evening.

“Of course we have to keep it going, but we still want to be competitive,” added Tuchel. “We do not want to use the situation as an excuse.

“We wished we would have had more time to deal with what happened, but someone in Switzerland decided we must play.”

Spain defender Marc Bartra suffered a broken wrist and has subsequently had surgery, but no other players were hurt.

“Every player has the right to deal with it in his way. The team did not feel in the mood, in which you must be for such a game,” said Tuchel.

“We let the players choose if they wanted to play. But this morning, we found that the training had done good, that it had made us think of something else.”

German police have described it as a targeted attack and detained a suspect with “Islamist” links.

“We were attacked as men and we tried to solve the problem on the ground,” said Tuchel, who has been in charge of the Bundesliga side since 2015.

“Everyone has their own way of reacting to events. The players had the choice not to play, but no-one chose this option.”

Dortmund were 2-0 and 3-1 down to French side Monaco, for whom 18-year-old forward Kylian Mbappe scored twice.

Monaco boss Leonardo Jardim had some sympathy with Tuchel’s view, but said the packed fixture calendar contributed to the hasty rescheduling.

“Maybe it should not be played today, but the calendar gave few options to be able to play the match,” he said.

“We produced a good result but it’s only half-time of the quarter-final.”

‘I will never forget those faces’

Turkey midfielder Nuri Sahin came on as a second-half substitute for Dortmund.

“It is hard to talk about it and hard to find the right words,” he said. “Last evening we felt how it is to be in this situation. I don’t wish a feeling like this on anyone.

“I didn’t realise what happened and when I got home my wife and son were waiting in front of the door. I felt how lucky we were.”

The 28-year-old, who has previously had a loan spell with Liverpool, added: “I know football is very important. We love football, we suffer with football and I know we earn a lot of money and have a privileged life – but we are human beings, there is so much more than football in this world.