Zimbabwe People First (ZPF) elders — Didymus Mutasa and Rugare Gumbo — have slapped former ally Joice Mujuru with a $5 million suit following her claims that the duo wanted to bed her. 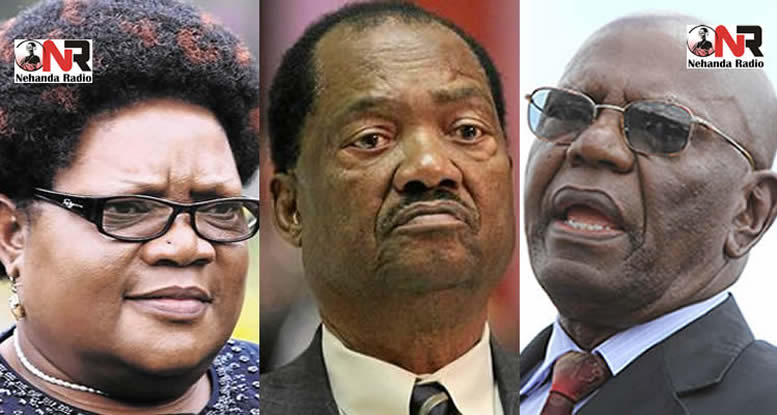 The two had demanded that the newly-formed National People’s Party leader retracts her statements and publicly apologises or they sue, but she refused, daring them to file their defamation suit.

Last month, Mujuru — the widow of  retired general Solomon who died in 2011 —  accused Mutasa and Mujuru of attempting to turn her into a sex slave after proposing that she be the opposition party’s “queen bee” — a claim First Lady Grace Mugabe went to town about at her recent rally in Buhera North.

In an audio recording of her addressing provincial structures in Masvingo on February 11, which has since been posted on Facebook, she accused her once close allies of asking her to sleep with male colleagues in the party, taking advantage of the fact that she is a widow.

However, Mujuru’s attorney — Gift Nyandoro of Hamunakwadi and Nyandoro Law Chambers — in response to the duo’s lawsuit, said the former vice president denies the charges and will not apologise.

“…our client denies the ill-advised and misplaced allegations contained therein,” Nyandoro said, adding they will defend the suit.

The elders have now filed the lawsuit.

According to court papers filed on Tuesday, Mutasa and Mujuru claim Mujuru’s statement was wrong and defamatory, adding it was aimed at tarnishing their reputations.

“The statement was understood by the addressees and was intended by the defendant (Mujuru) to mean the plaintiffs (Gumbo and Mutasa) are unfaithful and immoral in the following respects: that the plaintiffs asked the defendant to engage in sexual activities with multiple men for political benefits.

Mutasa, 82, and Gumbo, 77, who claim in their papers that they are respectable people in the society, said that they never demanded sex from Mujuru, adding that her statement was malicious.

“As a result of the defendant’s utterances, there have been disturbances in the plaintiffs’ families and the plaintiffs’ standing as former ministers, statesmen, high public figures and liberation war fighters have been diminished and soiled locally, regionally and internationally,” the duo said, before demanding $5 million in damages and an unconditional apology from Mujuru. Daily News