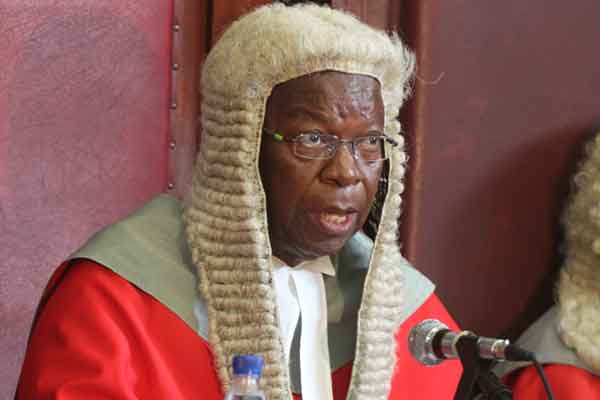 Zimbabwe’s Constitutional Court (Con-Court) is grappling with a legal vacuum because it does not have a quorum of at least nine judges, as required by the Constitution, to hear a contentious challenge to the selection process of a new Chief Justice (CJ).

The crisis was precipitated by University of Zimbabwe law student Romeo Zibani’s challenge of the temporary appointment of retired Justice Vernanda Ziyambi to constitute a panel of Supreme Court judges that heard his challenge against the selection of a new CJ to replace the retired Godfrey Chidyausiku.

This came after five Supreme Court judges recused themselves from an appeal hearing in which the Judicial Service Commission (JSC) had opposed High Court judge Charles Hungwe’s interim interdict preventing it from conducting public interviews of candidates for the CJ job, after calls that President Robert Mugabe unilaterally appoint.

JSC immediately lodged an appeal, automatically suspending Judge Hungwe’s order, with the Commission forging ahead with the interviews.

A three-judge bench of the Supreme Court on February 13 heard the JSC’s appeal against Judge Hungwe’s judgment and unanimously set aside the order.

On February 22, Zibani applied to the Con-Court for an order setting aside the Supreme Court’s judgment on the grounds that the appointment of retired Judge Ziyambi to preside in the appeal was unconstitutional.

Zibani argued it was impossible under the Rules of the Con-Court for there to be any hearing or decision on his challenge because the Con-Court’s quorum was reduced to two from three that a Supreme Court hearing requires.

In his notice of motion on Tuesday, Justice minister and Vice President Emmerson Mnangagwa, also requested that the decision by the Con-Court be rescinded and set aside on the grounds that it was granted erroneously.

His argument now is that the Con-Court was “incapacitated” from hearing the matter because of conflicts disabling its members from sitting, and also set out the specific grounds of the disablement — that retired Justice Ziyambi did not take her judicial oath.

“The peremptory provisions of Section 185 (2) of the Constitution require that a judge takes the oath of office upon appointment. My belief is premised on the fact that the letter of appointment of the fourth respondent (Zyambi), which I also received, makes no mention of that issue,” argued Mnangagwa.

Chidyausiku disputed Mnangagwa’s argument, saying the “correct legal position is at variance with the averments” made by the VP.

After the recusal of the five judges from the Constitutional Court, the three judges did not hold plenary sessions, as there was no quorum required for this.

It is in the plenary, according to the Rules of Court, that decisions or judgments are made.

Alex Magaisa, a law professor at the Kent Law School in the UK, said it was curious that so many judges recused themselves to the point that the recently retired Justice Ziyambi had to be recalled to the bench to make up the quorum.

“One must hope that judges did not take the easy but cowardly route of avoiding a difficult case or worse, that there was no undue influence or pressure on judges leading to mass recusals,” the former advisor to ex-Prime Minister Morgan Tsvangirai said.

“They deprived themselves of an opportunity to write solid judgments in a matter of great legal significance in which the integrity of the Constitution was at stake.”

Veritas, a legal and parliamentary watchdog, noted that it was now impossible to meet the Con-Court bench quorum of nine judges to hear Zibani’s case as some of the law lords are part of the candidates running for CJ.

“None of the judges who are parties to the case — the (now former) chief justice and the candidates for his vacant post — will be able to sit, nor will the judges who recused themselves from the appeal,” Veritas said.

It is not clear why the five judges recused themselves from the factionally-charged CJ succession row, although some speculate that they were vaccinating themselves from being subject to intimidation; and that they feared their constitutional guarantees of independence and immunity could be violated by threats of dismissal and indictment if they heard the case.

The CJ job — besides overseeing the Con-Court and Supreme Court’s administration and lobbying on the top courts’ behalf on matters involving its docket and jurisdiction — also has a political nature, and has a key role in presidential impeachment motions and elections, which are often disputed here, hence the intense factional fights.

Mnangagwa and his Team Lacoste Zanu PF faction are keen to have Chiweshe take over from Chidyausiku, while the camp led by First Lady Grace Mugabe wants Justice Makarau. Daily News