It cannot be overemphasized that churches in Africa are instrumental to the witch craze in the region. Programs and activities of faith organizations continue to fuel witchcraft suspicions with sometimes horrific consequences on alleged witches. There is an urgent need to counteract this dark and destructive process. We must call witch finding churches to order or rue it! 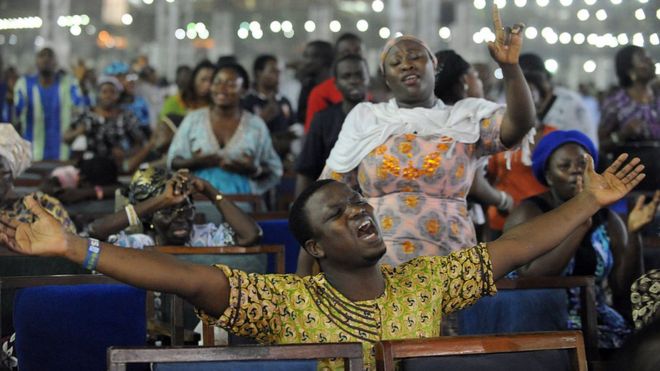 The main issue remains: How do we put this vicious campaign to an end? How do we restrain witch imputing churches that exist and operate across Africa? Getting African churches to join the campaign against witchcraft accusation is important because if this horrific trend must stop, the process will start in the churches, from the churches, with the churches, and by the churches. Christian groups must lead the way. They must champion the cause of making witch hunting history in the region.
Unfortunately, this is not yet the case. Pentecostal churches are still in the business of hunting witches. They invoke and exorcise witches and wizards. Witchcraft evangelism is still the ‘religious order’ of the day in the region.
Related Articles

Most African Christians are lazy and ignorant

Anti-bullet charms and destructive power of superstition in…

Dec 6, 2016 424
For a better understanding of how Christian churches have turned into witch finding fronts, let us take a critical look at a leaflet that was published by the Living Faith Church in Abuja, Nigeria. The leaflet was meant to promote a church event where people would be freed from the yoke of occult forces. The theme of the event was: ‘Come and See… Jesus Destroys All Oppressions”
The information on the leaflet surely appealed to people in the country especially millions who were experiencing all sorts of difficulties such as hunger and starvation, poverty, unemployment, business failure and disease. The Church used a quotation from Isaiah 54.14 to scripturally situate their program. Then it went ahead to use witchcraft to frame the message:
“Are you being oppressed by the wicked forces of darkness, witches and wizards? Are you harnessed by the occultic forces that makes(sic) you live a life of uncertainty?”
Then it went ahead to assure the readers of the reality of the oppression: “Let me tell this: Wickedness is real! Satanic oppression is real!” The leaflet enjoined the reader to surrender to Jesus in order to gain ‘total freedom from all oppressions of the devil.
It is important to note that the whole idea of asking people if they were oppressed by witches and wizards was suggestive and very likely to lead to imputations of witchcraft.
This is because, given the desperate quest for solutions to myriads of problems, people are likely to reply in the affirmative, even if such a response would lead to some momentary psychological relief. People are likely to begin seeing their problems through the lens of occultism and ascribing responsibility to imagined occult agents in their families and communities. This is how such church messages are connected to witch hunts.
Church members and the general public need to understand that witches and wizards are creations of the mystical and superstitious minds of pastors and churches. Occult forces do not have a real existence and are not capable of oppressing anybody. Life’s challenges and difficulties which people face and encounter have nothing to do with witches and wizards.
There are problems and challenges which can be rationally explained and require evidence-based measures to tackle and address.
The public needs to know that the alluded ‘oppression by wicked forces of witches and wizards’ is a make-believe which pastors, godmen and women use as a power base. Attributing problems to occult forces is a device for the exploitation of gullible ignorant folks.
Wake up Africans Wake up!

The church and its neglected role

Most African Christians are lazy and ignorant