A Brazilian football player who survived a plane crash in Colombia on Monday is recovering and may be able to resume his career, his father says. 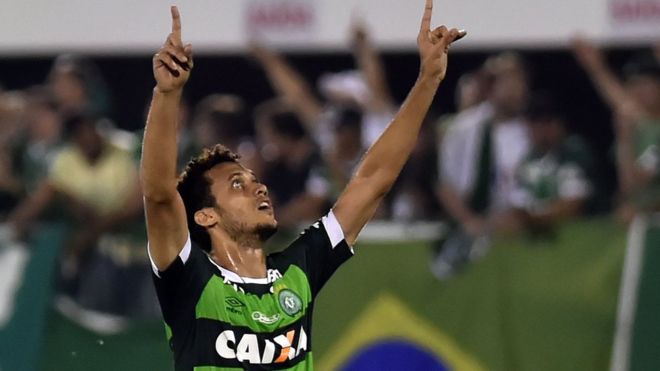 Helio Hermito Zampier Neto, a 31-year-old defender for Chapecoense, was in a stable condition, doctors said, after surgery on a lung, a knee, a wrist and his head.

Five other people survived the crash, which killed 71 people.

Colombian officials say evidence is growing that the plane ran out of fuel.

Miguel Quiroga, the pilot of the British-made Avro RJ85 aircraft, had been warned by an official at Santa Cruz airport, in Bolivia, where the plane took off from, that he might not have enough fuel, Bolivian Deber newspaper said.

But, despite the official’s concerns, he went ahead with the flight to Medellin. The country’s authorities have not yet commented.

In a leaked tape, the pilot can be heard warning of a “total electric failure” and “lack of fuel”.

The flight missed a planned refuelling stop in Cobija, on the border between Brazil and Bolivia, because the airport did not operate at night, Brazil’s O Globo newspaper reported.

The pilot had the option to refuel in Bogota, it said, but headed straight to Medellin.

Bolivia’s aviation authority suspended the operating licence of charter airline LaMia, which was part-owned by the pilot and two other aviation officials.

Two of the survivors, crew members Ximena Suarez and Erwin Tumiri, were said to be in good condition. The four others were still in intensive care.

Neto’s father, Helam, said on Facebook that news of his recovery was giving the family “renewed hope and faith”.

“My son is getting better and better. He has just undergone surgery on his leg and doctors say he will return to football,” he said.

“We shall continue praying because we still need his discharge from hospital to see him closely.”

Doctors said 24-year-old goalkeeper Jakson Ragnar Follmann would not lose his left leg, after having his right one amputated.

Defender Alan Ruschel, 27, had spinal surgery, but his movements were not affected, they added.

The bodies of the Brazilian victims are due to be flown out of Medellin on Friday. Many of the victims were players and staff of Chapecoense, who were due to play in the final of the Copa Sudamericana against Medellin team Atletico Nacional.

In the squad’s home town of Chapeco, in southern Brazil, temporary structures have been set up in the football stadium for an open-air wake on Saturday.

The plane’s flight recorders are to be examined in the UK. A full investigation into the crash is expected to take months. BBC News

FC Platinum set up Harare base