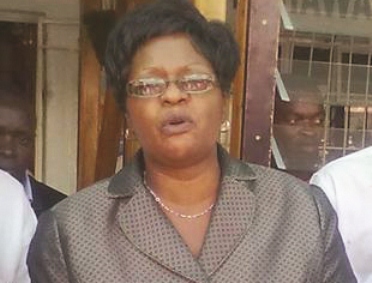 Mabika, who deputises Madiro, was on Wednesday named as one of the suspects under investigation over the missing funds which were collected using Zanu-PF’s name.

This came out as Superintendent Edward Marodza testified in a stock theft case against Mabika who stands accused of stealing six calves donated to the party by a Chipinge farmer.

Tollgate relief for motorists….five to be moved…

Disputing Mabika’s lawyer, Mr Tinofara Hove’s argument that his client was clean regarding the missing diamond money donations, Supt Marodza, said she was a suspect and police were still investigating the case.

He replied in the negative when Mr Hove said there was no way his client could be a suspect when she was the one who lead the provincial disciplinary team that heard the matter.

“That is not correct. She has not been cleared and the case is still under investigations,” he said.

Supt Marodza is the second-in-command of the investigating team which is being headed by Chief Superintendent Crispen Makedenge.

In cross examining Supt Marodza, Mr Hove said the police were being used in the political fights happening in the provincial structures of Zanu-PF in Manicaland.

“After seeing that she had no case in the diamonds issue you came up with the stock theft charge because you are so determined to prosecute her. This is all politics. The fact that you have not recorded a statement from her concerning the diamonds case is a clear indication that you have no case against her. Isn’t that correct? Knowing or unknowingly you are participating in an agenda to persecute the accused,” asked the defence lawyer.

“No that is wrong. The case is pending. The accused has not been cleared in those investigations. It is not true that we found nothing on her and we are not on a witch-hunt to get her,” replied Supt Marodza.

Soon after public prosecutor, Mrs Christine Nyamaropa, closed the State’s case, Mr Hove made an application for discharge. In the application Mr Hove maintains that his client has no case to answer.

“The issue in this regard is not whether the State has proved its case beyond a reasonable doubt as to justify a conviction, but is rather that it has adduced sufficient evidence and other evidential material, which establish a prima facie case against the accused…the full elements of stock theft and obstructing the course of justice have to be alleged and established for a prima facie case to exist…once the essential elements of the offence have not bee established, then ipso facto the accused can not be placed on her defence.”

Mr Hove said the whole case was a classic example of political persecution.

“In the premises, the only reasonable inference to be drawn from this whole case is that there is a hidden political agenda aimed at embarrassing the accused. This is a classic case of political persecution. This case is not so much about justice as it is about politics. This clearly emerges from the fact that there was never an official complaint lodged by Zanu-PF Manicaland province. This clearly emerges from the evidence of Cde D Mutasa who summarised the motive for the persecution when he said ‘when two bulls fight, it is the grass that suffers’. This was a verbatim quotation from the main State witness. Clearly, the accused is the grass that is suffering because two bulls are fighting. It has nothing to do with the attainment of justice,” reads the application.

“Obviously, the accused knows that the calves died, thus if they died as rightly conceded by Cde Mutasa, then there can be no stock theft. Most importantly, there is no explanation why this case should be reported when elections are near, if it occurred in 2011 as alleged. The record clearly indicates that it was the accused who notified the provincial executive that six calves had been donated. If the accused had not notified the executive, then the executive would not have known about the donation. This begs the question “how can the accused steal calves that she had notified the executive of their existence? Even the evidence of Cde Mutasa is clear in that he never lodged a report with the police to the effect that Zanu-PF had been deprived of the claves, he did concede that he knew that the calves had died. Therefore, he could not report that the calves had been stolen when he knew they had died,” reads the application.

Coming to count two of obstructing justice in that Mabika is alleged to have altered minutes to reflect that the provincial executive knew that the calves had died due to starvation in a bid to cover her tracks, Mr Hove said the charge was mere desperation on the part of the State.

“This clearly establishes the level of desperation on the part of the State. Knowing fully well that there can be no case of stock theft against the accused, since the accused had not stolen the calves, the State sought to charge the accused of (obstructing justice). The oracle of this charge is that the accused should know that she was being investigated by the police. This is subjective knowledge on the part of the accused, or objective inference from the conduct of the accused. If the accused subjectively did not know that she was being investigated, or objectively could not have known, then the offence can not be committed. In casu, the minutes of the 21 November 2011 clearly show that the accused was not present during the meeting.

Therefore, how can she then insert notes in a meeting that she was not present? Most importantly, she is not the one who inserted the minutes…as will appear hereunder, there is no offence that was committed, neither has the State established a prima facie case against the accused. To place the accused on her defence will tantamount to asking her to convict herself from her own mouth.”

Mr Hove said the facts to the matter are that the whole case was constructed in a bid to remove his client from politics.

“This motive clearly emerges from the star witness, Cde Mutasa. It is to ensure that the accused is removed from the leadership of Manicaland province and also to ensure that she does not stand in the forthcoming parliamentary elections.

The motive is to embarrass the accused politically and tarnish her image…under cross examination, he clearly summarized the motive of the prosecution, which motive was not the attainment of justice but the political prosecution of the accused. This was aggravated by the fact that the accused had spurned his sexual advances.

Mrs Nyamaropa will respond to the application on Monday. Mrs Chiundura will hand her ruling on June 17.  Mabika is expected to appear in court today (Friday) in the joint stock theft case with Mike Madiro before provincial magistrate, Mrs Lucie-Anne Mungwari. Manica Post

Tollgate relief for motorists….five to be moved further out