Lee Angel, brother of flamboyant Zimbabwean preacher Uebert Angel, was deported from Botswana along with his wife for allegedly robbing his own church of offerings and tithes according to a report by The Monitor newspaper in that country.

Lee Angel who was the Botswana overseer of the Spirit Embassy Church led by brother Uebert, was also accused by church followers of “demanding that the Botswana church raise money to buy his ‘pretty wife’ a Range Rover vehicle.

In Zimbabwe brother Uebert reportedly bought a slick Bentley GTC in June this year. A Pastor Brian from the church confirmed that the car was a gift from a church member but refused to shed any more light.

TB Joshua “a General who set many things in…

Uebert Angel declined salary and perks for ambassador at…

The Monitor newspaper says concerned members of the ‘fast growing church’ in Botswana reported Lee’s “extravagant habits to security forces.” After a series of interviews with church members, Lee was given his marching orders.

Lee is also accused of having kept all the church’s money at his plush Phakalane house and used it at his discretion.

Matters came to a head when he ordered church members to contribute P80,000 ($10,000) for the construction of chalets at the church’s headquarters in Zimbabwe. This $10,000 is demanded from all Spirit Embassy churches. 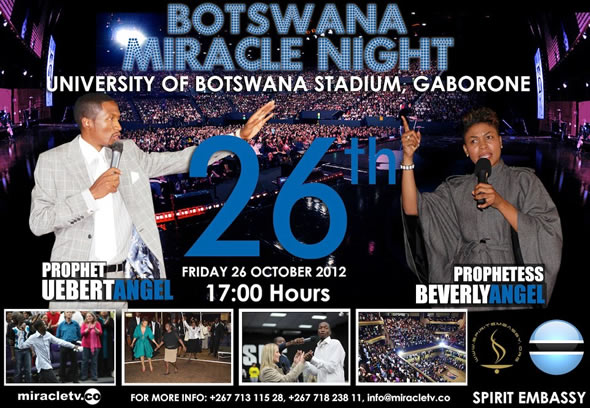 Big brother Uebert Angel himself is also raising eyebrows in Botswana with his P800 a ticket dinner to be held on Thursday evening at Boipuso Hall. Followers must fork out the hefty amount just to interact with him and his wife, Beverly.

The expensive dinner is a prelude to Uebert Angel’s forthcoming “Botswana Miracle Night,” scheduled for Friday at the University of Botswana Stadium. Spirit Embassy is said to be a hit on free-to-air television across Africa.