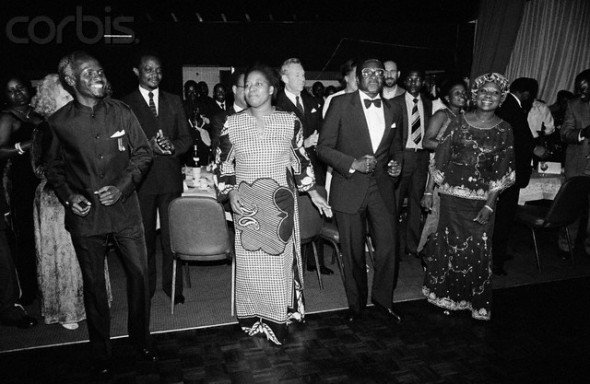 Those who live in glass houses should not throw stones, but obviously someone forgot to tell the folks inside Zanu PF. In this expose, we look at the love scandals that have dominated Mugabe’s party since independence in 1980.

This article does not seek to exonerate Prime Minister Tsvangirai from his current personal problems with Locardia Karimatsenga Tembo but aims to simply point out the hypocrisy and double standards exhibited by his political opponents in Zanu PF who have pounced to extract political capital.

The country’s first ceremonial President after independence, Canaan Banana, was arrested in 1997 on charges of sodomy following revelations made in the murder trial of former bodyguard, Jefta Dube.

Dube had shot dead a fellow police constable who taunted him as “Banana’s wife’.

The trial exposed how Banana coerced numerous men in his service as President, ranging from domestic staff to security guards, into accepting sexual advances. His preferred method of seduction was to dance to Dolly Parton records, while wearing a belt of bullets across his chest.

Banana even targeted members of some of the sports teams for whom he had acted as referee during matches. When Dube complained to the deputy police commissioner, he was told that nothing could be done. When he asked Banana to stop, Banana refused, telling him: “I am the final court of appeal.”

The case also embarrassed President Robert Mugabe because it became clear he knew about the sodomy allegations but did nothing about them. Banana dismissed all the allegations against him as “a mortuary of pathological lies and a malicious vendetta of vilification and character assassination.”

There was to be however an army of accusers including dozens of former University of Zimbabwe students, members of the State House football team, assorted policemen and air force officers. There was even testimony of sex with cooks, gardeners and several aides, a jobseeker and a hitch-hiker.

After seeking help from many people in the Zanu PF government, Dube finally found help from the now late Vice President Simon Muzenda. According to reports “Muzenda arranged for Dube’s transfer out of the State House, after asking Dube to write up his allegations against Banana.”

Banana was eventually found guilty of eleven charges of sodomy, attempted sodomy and indecent assault in 1998.

Although Banana fled to South Africa while still on bail he eventually returned to Zimbabwe in December 1998 after being convinced by the then South African President Nelson Mandela to go back and face the ruling. Banana was sentenced to ten years in jail, nine years suspended.

In November 2003, Banana died of cancer.

An incident that has highlighted the impunity of the Central Intelligence Organisation (CIO) in Zimbabwe is the May 1990 disappearance of Rashiwe Guzha. It was widely reported that the then CIO Deputy Director Edson Shirihuru was the man responsible for her disappearance.

Guzha, a young typist within the CIO had just broken off an affair with Shirihuru. Although an enquiry was set up by the Zimbabwean government the results were never made public. Because her remains were never found many believe Guzha was killed and her body dissolved in acid.

As Shirihuru awaited trial for the abduction and disappearance of Guzha, it’s suggested that he “whispered just that little bit too loudly to friends saying that if he were convicted “I will not go alone”. He intended to squeal. Not so long after making the threat, Shirihuru was a dead man in August 1993.

At Shirihuru’s funeral, President Robert Mugabe claimed the case was closed. This was despite strong evidence implicating Shirihuru, Collen Chingura Ndangariro and Cleopus Budiyo Gwinyai in Guzha’s disappearance. Additionally the police had a reported 53 witnesses.

Collen Chingura, one of those implicated, is now a lecturer in commercial law at a technical college in Gweru and last year claimed Shirihuru framed him. He claimed Shirihuru went into a jealous rage and murdered Guzha after discovering she was two-timing him with a cabinet minister.

In a report run by The Zimbabwean newspaper last year “Chingura claims he only drove Guzha, as he usually did on Shirihuru’s instructions, to a hotel used as a love nest on the day when she was last seen alive.”

Join me tomorrow (Thursday) for Part 4 of this series. You can also follow me on twitter @LanceGuma