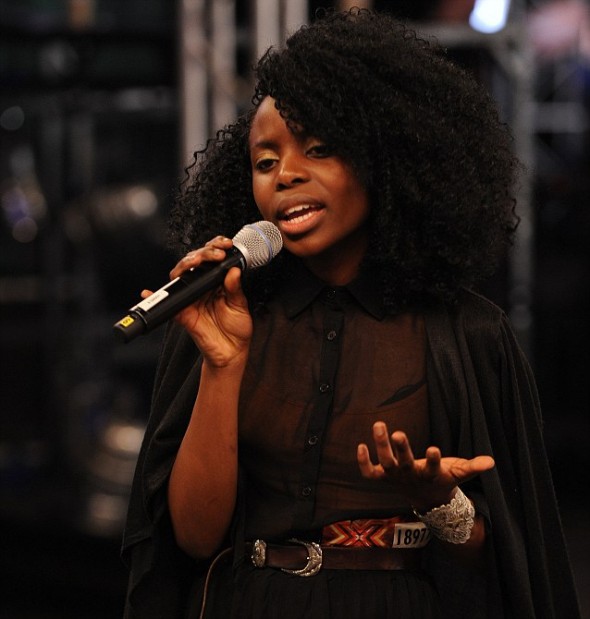 A British newspaper granted exclusive behind-the-scenes access to the first day of X Factor 2012 auditions in London is predicting that 23-year-old Zimbabwe-born Sharon Rose could be one of the contenders.

According to the Daily Mail, Sharon like other contestants had to wait for around 12 hours for a five minute shot at fame at the mass auditions held at the former Millennium Dome.

Groups of around 100 contestants at a time were herded like cattle into rows of seats and waited to be called into one of 20 audition pods around the venue.

Simon Cowell thanks medics after breaking back in electric…

Sharon, a singing waitress from Essex, we are told has auditioned twice before. “But she’s considered such a strong contender this year that presenter Dermot O’Leary interviewed her mum Rose and dad Godfrey earlier in the day.”

The paper says “It’s clear her personal story has piqued the interest of producers. ‘They’re constantly asking about my family background, because we all sing in a choir and are from Zimbabwe originally,’ she says.

“We came here in 2000 when I was ten years old,” Sharon told the Daily Mail. On her official MySpace bio Sharon says “I was born the third of four children to Godfrey and Veronica Nyarambi in a beautiful little hospital called Mater Dei Hospital (Bulawayo, Zimbabwe).”

She says “I firmly believe that the day I came home from the hospital was the day I started singing my first song. As a child, my parents encouraged me to pursue my music and follow my dreams, and so I did. As they were in a band themselves, our whole family was like the living with the Jacksons!”

“We were (and still are) tight and we sang ALL THE TIME!! which amazingly, never got boring! lol! I started performing on a stage in church at a very young age and I absolutely loved it, I think it might have been the fact that I was very attention seeking that made me very confident, so being on a stage in front of hundreds of people at a young age was not difficult.”

“As a teen, I remember singing along to people like Whitney Houston, Mariah Carey, Brandy and Destiny’s Child. And now, you’ll find artists such as Lauryn Hill, Aaliyah, Ella Fitzgerald, Coldplay, Jill Scott and Robyn invading my MP3 player.

“The older I got, the more I dreamt about being a performer and I just could not shake it, so one summers day I decided to go for it. And so here I am, taking a chance on life and doing what I love!” she added.