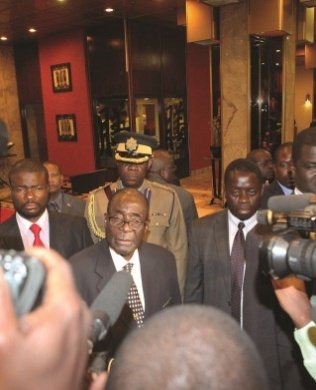 HARARE – President Robert Mugabe walks into a storm at a Sadc summit that begins in Maputo Friday, as mediator South African President Jacob Zuma presents a report to the regional organ showing that a new constitution is being stalled by sharp differences in Zanu PF.

Zimbabwe, which was not on the Sadc agenda as the region sought to deal with more volatile countries such as Madagascar and the Democratic Republic of Congo, shot back into focus after a visit by Zuma on Wednesday failed to break the deadlock on a draft constitution.

Mugabe insists the draft, which was agreed to by his party negotiators, should be amended because his party is unhappy with clauses such as those that trim presidential powers. His MDC coalition partners say the draft should be taken to a referendum for a decision by the people.

A new constitution is one of Sadc’s key demands for an election to take place in Zimbabwe.

Zuma, who was appointed by Sadc to mediate in Zimbabwe’s long-drawn political crisis, presented a report to the Sadc Troika organ on defence, politics and security cooperation yesterday highlighting that, while progress has been noted in some areas, the constitution remained deadlocked.

He told journalists before leaving Harare on Wednesday night that all parties in the coalition government had reported movement, but admitted that haggling on areas such as the constitution was delaying real progress.

“There has been some movement forward although there are some glitches here and there, but not as major as they used to be,” Zuma told reporters after a round of meetings lasting more than four hours at a Harare hotel. “I will be reporting to Sadc,” he said.

Prime Minister Morgan Tsvangirai said a decision had been reached to refer the sticking issues to the Sadc summit.

“The position is that different political parties made representations to President Zuma. Zanu PF has not concluded discussions around the constitution so it has been decided that the matter would be revisited at the summit,” Tsvangirai said after the Harare meetings.

“It is Maputo,” Deputy Prime Minister Mutambara shouted as he left the venue of the meetings. Mugabe said he hoped to meet Tsvangirai in future and find consensus, adding that the Maputo summit would be “smooth”.

Zanu PF has been dithering on a position regarding the new constitution despite the party spending over 50 hours reportedly auditing the draft governance charter. MDC formations say Zanu PF factionalism is stalling the process.

Factionalism that has been at the heart of the party has seen Zanu PF struggling to arrive at a consensus as different camps fight to protect their own interests. Another issue likely to come up for discussion at the summit is security sector reforms before elections in Zimbabwe.