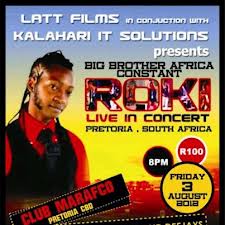 A novice promoter is this week mourning his losses after the much anticipated Roki show flopped as less than a hundred people paid to watch the young crooner.

Those who paid were left agitated after the musician only played for about 45 minutes before leaving the stage at Marafco Nite Club. Stones then rained on the now notorious venue in central Pretoria as the show was aborted. Many had to scurry for cover.

The promoters had to hide in cars as angry fans bayed for their blood demanding to be paid back their money. Roki, who was billed to start performing at 9pm on Friday evening only came on stage at 1am on Saturday morning when hundreds of his followers had already left the venue without even getting inside.

A source close to the organisers, said that Roki was holed in his hotel room with an unidentified woman in Randburg. Some allege the woman was one of his band members. Efforts to persuade Roki to leave for the show fell on deaf ears and the young musician was even abusing the organisers.

The distance between the venue and the hotel where Roki was is approximately 70km.

“I want to apologise to some of the fans who came and wanted to watch Roki. It didn’t happen the way we wanted it to. There were a number of challenges that we faced and I believe things could have happened in a better way. It would be unfair for me to comment on Roki’s personal issues and I would suggest you speak to him as well and hear his side of the story.

“To begin with, he had promised to come with his own instruments but that was not what he did. I had to incur extra costs to hire the equipment on the day. Some fans left without even getting in as they were annoyed by the long delay. I don’t think we will be able to work together again with Roki. It was a huge financial loss,” said the dejected Tachi.

Roki had asked for $1,500 performance. Despite being visibly drunk, Roki gave a good performance with the makeshift instruments whose sound was very poor. The Chidzoka-fame singer had a live band for the first time in South Africa and could have left a positive lasting impression. It was a cocktail bound to fail from the beginning.

Our source indicated that Roki was held up at the OR Tambo International Airport after he was found with some beer bottles in his hand luggage upon his arrival on Friday. He was cautioned and released.

Musical instruments were only hired on the day of the show and there were no microphones at the venue until 12 midnight. In the meantime, pickpockets milled at the entrance and a number of people lost their valuables to thugs as fans awaited Roki’s arrival.

Those who billed to warm up the stage could be seen enjoying their drinks and only started singing at midnight when the mikes arrived but a number of fans had already left. Poor security inside the venue resulted in the stage being a free-for-all as fans could be seen hugging the artist freely.

One physical fight even started on the stage before spilling to the crowd. Supporting acts were then given less than 10 minutes each to perform. Those who came on stage include Sean One and Linx who were given a lukewarm reception by the fans.

Efforts to get a comment from Roki proved fruitless as neither of the promoters knew his South African mobile number. He, however, attended the Big Brother Stargame closing show over the weekend in Johannesburg. H Metro

Prophet Makandiwa says he will not register