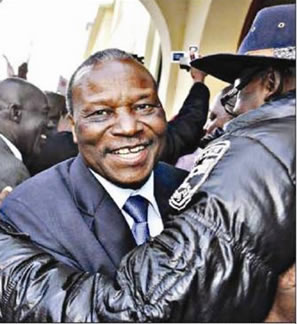 A week after civil servants petitioned Finance Minister Tendai Biti demanding wage increases, a rowdy group of war vets aligned to ZANU PF besieged his offices in Harare on Monday, threatening to close down the ministry.

The war vets and other civil servants are demanding a minimum salary of $564 and 15 percent of the basic salary as a rural allowance. The rowdy group who went to Biti’s office accused him of failing to look after the welfare of civil servants.

A report by the Daily News paper says at one point the group “threatened to beat up journalists” covering the drama. “He wants civil servants to quit jobs and be helpless. He wants to run down the economy. He is increasing fuel rates and food prices but he does not know that we liberated this country,” one war vet said.

Charles Mpofu from the War Veterans of Zimbabwe Harare Province is quoted as saying: “I have talked to Biti and agreed that he look at our complaints and respond within five days but if he does not respond this time we are going to close his ministry. We want him to look at the pensions and salaries of every civil servant.”

Last week Biti told Senators in Parliament that next time civil servants stage a demonstration against government for better pay, he would join them. Biti said he wanted better pay for civil servants but “the problem is that 73 percent of the budget is going towards 235,000 people, leaving only 27 percent for 14 million.”

This was in reference to Anjin, an army/Chinese controlled diamond firm, that has failed to remit any money to Treasury. The Ministry of Defence has also been going ahead recruiting for the army, despite there being no government agreement on this.

Meanwhile it’s not the first time war vets and ZANU PF militia have besieged Biti’s office. Following a bust up between Biti and Mugabe in a meeting last year, a petrol bomb was thrown at the durawall of his house and ZANU PF has sponsored many other demonstrations at his office. SW Radio Africa