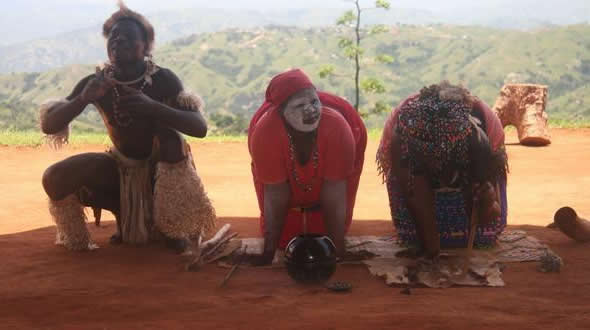 There was mayhem at an apostolic church in Gokwe South when two brothers stormed a church meeting and dragged away an elderly congregant whom they were accusing of practising witchcraft.

The two brothers, Nakai (35) and Patsikadova Ngwenya (42) reportedly disrupted the church service and dragged away the elderly woman, Ms Esnath Maphosa (72), who they accused of bewitching Nakai Ngwenya’s wife.

Nakai Ngwenya’s wife, Martha Mpofu (26) is said to have later died at Ms Maphosa’s homestead while she was trying to heal her. Police confirmed the incident, which occurred on Saturday last week in Chiriga Village, Chief Sayi.

A source said on the day, the two brothers took Ms Mpofu who had suddenly fallen ill following an altercation with Ms Maphosa, to the elderly woman’s homestead whom they were suspecting to be a witch, for a healing session.

“During the morning of that same day, Ms Mpofu had a misunderstanding with Ms Maphosa on who should fetch water first at the only well that is left with water in the village. Following the altercation, Ms Mpofu proceeded to fetch water ahead of Ms Maphosa and on arriving home, she suddenly fell ill,” said the source.

The source said the Ngwenya brothers then suspected that Ms Maphosa was responsible for Ms Mpofu’s illness and went to Ms Maphosa’s homestead intending to confront her. The two could, however, not locate Ms Maphosa who had already left for the church service.

They then followed her to the church after which they disrupted the church meeting by dragging Ms Maphosa away,” said the source.

“Ms Mpofu, however, passed on while Ms Maphosa was still attending to her, sparking outrage from the Ngwenya family. The Ngwenya family later demanded compensation and police had to be called in to intervene and later facilitated the burial of Ms Mpofu.”

“It was during the investigations that the police discovered that the two brothers, Nakai and Patsikadova Ngwenya had prior to the death of Ms Martha Mpofu, stormed a church service while indicating Ms Maphosa to be a witch.

While the matter was later referred to the local chief, as police we want to take this opportunity to warn members of the public that it is an offence under Section 98 of the Criminal Law Chapter 9.2 (3) for any person to engage in any practice knowing it is commonly associated with witchcraft.

“On the other hand, Section 99 of the same piece of legislation makes it an offence for any person who groundlessly or by use of non-natural means accuse the other person of witchcraft,” he said. The Chronicle