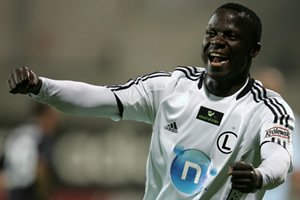 TAKESURE CHINYAMA will probably spend the remainder of his career at Orlando Pirates after agreeing terms for a three-year deal, with the option of a further two-year extension, with the South African champions.

The Zimbabwe international forward, who turns 30 on September 30 this year, passed a medical in Johannesburg on Tuesday and his agents brokered a three-year deal for him at the Soweto giants.

By passing the medical, Chinyama also silenced the critics who had been questioning his fitness amid fears that he has a serious knee injury that forced him to make a premature departure from his romantic flirtation with European football.

Pirates set to offload Terrence Dzvukamanja at the end of…

Depending on the impact that he makes during the course of his deal, amid a wave of great expectations within the ranks of the Pirates leadership, Chinyama could pen a deal to stay for a further two years at the Buccaneers.

Chinyama could be 35 by the time he leaves Pirates, if everything goes according to plan, and his career as an international footballer would be as good as over. The Buccaneers reaped huge rewards last season from their investment in seasoned players with skipper Lucky Lekgwathi, who turns 36 on August 1, the rock on which they built their championship-winning team.

South African international striker, Benni McCarthy, who turns 35 on November 12, was also inspirational in his debut season with the Bucs as he scored a number of crucial goals. So, Chinyama’s age, really, isn’t a factor and all that remains is for Pirates and Dynamos to agree a transfer fee for the hitman, who has just six months left on his one-year deal with the Glamour Boys that expires on December 31, and could walk away for free in January if the two clubs don’t agree on the fee.

In the event of a stalemate between the two clubs, which is highly unlikely, Chinyama could sign a pre-contract with Orlando Pirates now and then walk into the Buccaneers’ stable for free when the January transfer window opens in South Africa. DeMbare paid Chinyama US$15 000, when he arrived as a free agent at the beginning of the year, to tie him to that one-year contract.

Although Chinyama has agreed terms with Pirates, he is unlikely to be unveiled as a Bucs player until probably at the end of July, when all the paperwork, including the securing of a work permit, has been completed. This means the big forward will, barring injury, remain available for DeMbare’s Caf Confederations Cup assignments against Angolan side InterClube, starting with the first leg of the final qualifying round at Rufaro on Sunday.

Chinyama’s handlers expect all the paperwork to be completed by the end of next month and, while Pirates wanted the striker to start by playing in the season-opening Black Label Carling Cup against Kaizer Chiefs on July 28, it’s now very unlikely he will make his debut then.

Chinyama is set to be joined in South Africa by his Dynamos teammate, midfielder Denver Mukamba, who has been impressive during his trials at Bidvest Wits and is largely expected to tie a deal with the Johannesburg side. Mukamba, who left Harare on Sunday for a week-long trial period at Super Diski newboys, Pretoria University, did not even train for a day with the Tshwane club after Bidvest Wits came in with an offer and took him away to Johannesburg.

While reports circulating on the social media sites yesterday claimed that Mukamba had failed his trials at Pretoria University, it emerged yesterday that the lanky midfielder didn’t even train with the AmaTuks as he was whisked away by Wits before making an appearance for his original hosts.

Mukamba’s manager, Gibson Mahachi, yesterday said while the midfielder was scheduled to have trials at Pretoria University, subsequent developments on Monday forced them to change his programme and take him to Wits. Mahachi said even if Mukamba had trained with Pretoria Univesity for a day, which he didn’t do, there was no way the club could have come to a decision based on that day’s impression.

“The correct position is that Denver didn’t train with Wits because we were forced to shelve the one-week trial programme they wanted to have with him when Wits came into the picture on Monday and showed serious interest in him,” said Mahachi. “Initially, we had three clubs that wanted to see him playing and while the first arrangement was for him to go to Pretoria University, it all changed when Wits came along.

“I have dealt with Wits before, when I did the Edward Sadomba deal and when I took Evans Chikwaikwai there and when they heard Denver was in South Africa, they said, given our relationship, we should give them the first option to have a look at him. Once we settled on Wits we communicated to Pretoria University that there were changes to the programme and he would be going elsewhere and they can tell you that he never did anything, in terms of trials, with them.”

Mahachi said the feedback he had received from Wits officials was that Mukamba was doing well. “You can talk to the guys at Wits and they will tell you that Denver has been doing well and we expect him to come back home tomorrow (today) because he has to play for Dynamos in the Confederation Cup,” said Mahachi.

Mukamba and Chinyama have been key figures in the DeMbare team this season. Chinyama started the season with a bang and veteran football commentator, Charles Mabika, correctly predicted that he didn’t see the big forward lasting the entire season here before being whisked away to a foreign team.

“Takesure has started the season with a bang and playing at a level that is way, way higher than the local Premiership standards,” said Mabika. “To me, the level that I have seen him play in the games against Motor Action and Hardbody, is not even for the South African Premiership because that would be a waste of his talents.

“Takesure is playing at a level that you see from strikers playing in Europe and I have to say it clearly that I have been impressed so much by what I have seen in those two games Takesure makes sure the defenders feel his presence and he uses his strength well and you can tell, with his decision making, that he is playing at a different wave length and that is why he has been successful so far and, by the way, it’s not an easy thing to come and make a big impact leading the line at DeMbare.”