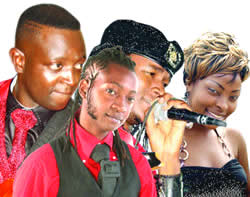 After his much-publicised run in the Big Brother StarGame, Rockford Josphats or simply Roki is on a roll. The man is out to give his legion of fans — especially those who failed to welcome him back home from South Africa — a big surprise.

Roki will make his first performance ever since returning home, when he features at superstar Oliver Mtukudzi’s “Last Gig” to be held at the Harare International Conference Centre tomorrow.

While the gig is meant to bid farewell to Tuku as he embarks on his whirlwind tour of the United Kingdom and the United States early next month, the event will also act as a welcome bash for Roki.

It will probably be the first time that Roki will share the stage with Tuku, Suluman Chimbetu, Jah Prayzah and Diana Samkange in his career, making the line-up a true representation of what Zimbabwe has on offer from katekwe, dendera, dancehall to urban grooves.

Roki is expected to play his hit songs that made him a household name and these include “Seiko?” “Suzanna” and “Chidzoka”. “We decided to rope in Roki because we felt that he needs a bigger audience to connect with his fans, especially those who have been watching him on TV during his stay in the Big Brother house.

“Roki will also use the same platform to unveil new songs he has been working on during his stint in the Big Brother reality show,” Josh Hozheri, organiser of the show, said.

Although Roki will bring in an interesting dimension to the gig, it will be without doubt Tuku himself who will in be in charge of proceedings considering that he will be bidding farewell to his fans before leaving for international shows.

The show will also mark the superstar’s two-month break from local shows, which he will resume in September with a birthday bash to mark his 60th birthday. Tuku celebrates his birthday on September 22. Sulu, Jah Prayzah and Diana will also be out in full force to prove that they are no pushovers.

Zim diamond looters on wrong side of history