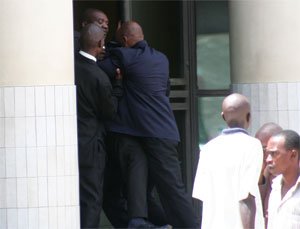 Tsvangirai’s spokesperson Luke Tamborinyoka confirmed the incident and said the Premier believed in “team spirit”, adding action would be taken over the matter. “The Prime Minister believes in team spirit. If one chooses not to be part of the team, there will be very few options left,” Tamborinyoka said.

But Sinemane told NewsDay the party security personnel were acting on instructions from Ian Makone, the Chief Secretary to the Prime Minister. Sinemane was appointed principal director responsible for monitoring and evaluation in the PM’s Office at the formation of the inclusive government in February 2009.

“I went to my office only to find that they got an instruction from Makone that I should not enter,” Sinemane said. “This seems to be a trivial matter, but is a template of what is to come and what would happen if you give power to people without sufficient preparation.”

Sinemane overpowered the security personnel and forced his way into the building to collect a “few personal belongings” before walking out after about 30 minutes. Makone confirmed the early morning scuffle, saying: “We operate as a team here (PM’s Office) and it’s either you belong to the team or you don’t.”

Sources close to the matter said Sinemane had been planted by Zanu PF to sniff out confidential information and pass it on to the former ruling party. “He is a plant working with Zanu PF. Makone has written a letter to the Public Service Commission seeking his (Sinemane’s) transfer. As far as the secretary (Makone) is concerned, he is being redeployed,” the source said.

Sinemane, however, said his woes started following the publication of a story in the State media alleging Tsvangirai was running a parallel government dominated by MDC-T activists and turning the government office into a party election command centre. The MDC-T immediately launched a witch-hunt which reportedly implicated Sinemane.

“The story doesn’t mention me, but Makone believes it’s me. We had a principals’ meeting and he decided to call his party security details and Gandhi Mudzingwa (special advisor to MDC-T leader Tsvangirai) to throw me out of the building. I told him I am a public servant, but I was told today I should not have access into the building,” he said.

“The secretary to the PM has decided to convert the entire office into an election team after the party’s congress in May 2011. The secretary is doing this because he is the elections director of the MDC-T and has also invested heavily in PM Tsvangirai’s political life over the past 10 years.” NewsDay