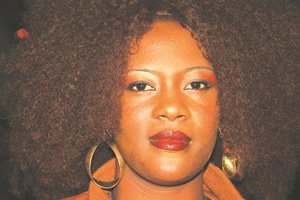 HARARE- It is not every day that Zimbabwean musicians put up spectacular acts when they launch their albums but last Friday Plaxedes Wenyika’s proved a point or two.

It was a launch and a half with some of Harare’s sought-after business people and music lovers turning up at the up-market Le Seranata Restaurant where songbird Plaxedes launched her comeback fifth studio album titled “Brighter Day”.

Since there was no riff-raff in the crowd which included former Reserve Bank of Zimbabwe chief advisor Dr Munyaradzi Kereke, Power FM stations manager Bridget Gavanga and officials from Premier Auto as well as Delta Beverages, who were the two major sponsors on the night.

Plaxedes Wenyika back with a bang!

The crowd was amazing while the music was soothing and everything from start to finish went according to the programme.

In a first of its kind, Plaxedes’ first copy of the album was auctioned for a cool US$1 800 with Dr Kereke the highest bidder.

The money was donated to Chinyaradzo Children’s Home to assist in its water and sanitation project. Music lovers were then taken on a journey into Plaxedes’s early life, education and  music.

Born in a family of four daughters, Plaxedes learnt a lot from her mother who was among the guests at the album launch. Other highlights included her children, Daryl and Gareth.

Being her night, Plaxedes made a grand entrance on stage dressed in an awesome long gown and sporting afro-kinky hairstyle accompanied by two bouncers.

The “Wadarireyi” singer showed why she is still one of the most cherished singers in Zimbabwe set to claim her position as the “queen of ballads”.

Rumbie Dzimba, Delta Beverages brand manger, hailed Plaxedes for her talent at the launch and hoped that she continues touching lives through her music.

But when it came to crowd control Plaxedes gives her all and no doubt people loved her and her music too. She got down dancing and it was no coincidence that she brought her dancing shoes.

Even the master of ceremonies Emmanuel Manyika could not hide his joy and he gave thumbs up to Plaxedes in Nigerian Pidgin style much to the delight of the crowd. Already plans are underway for Plaxedes to get a huge endorsement from Premier Auto, the car dealer of Range Rover and Jaguar.

Plaxedes Wenyika back with a bang!