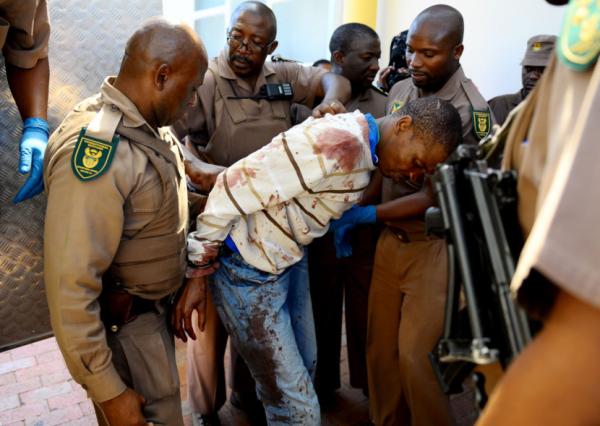 PRETORIA- Bloodied, bruised and limping, a humiliated, whimpering and grimacing Bongani Moyo, along with two fellow awaiting-trial prisoners, were paraded before cameras minutes after their arrests following their daring escape attempt.

Wearing bloodstained clothes, a shackled Moyo, along with bank robbery co-accused Khumbulani Sibanda and fellow Zimbabwean and suspected armed robber Themba Dube, who broke a leg in the escape, were on Wednesday brought before Correctional Services Minister, Nosiviwe Mapisa-Nqakula during a press conference.

Mapisa-Nqakula, who described the attempted escape from Pretoria Central Prison as “a movie”, demanded Moyo answer questions about his breakout, questioning him over how his mother would feel seeing his face in newspapers and on TV. “Is this what you want? Is this how you want to be known? Like naughty children who have become bad and evil”.

“This is how you will end up. Battered, bruised, bleeding and sore. And we will not feel sorry for you. We have no pity for you,” said Mapisa-Nqakula, hammering home her message to the three that escapes would not be tolerated.

Nine arrested in Khayelitsha after firearms discovered in…

The three are known escape artists, and according to warders at Pretoria Central Prison, are the “go-to” people when other inmates are planning escapes or seeking weapons, money, clothes, cellphones, getaway cars or information on which guards to bribe.

The escape, which has apparently led to the suspension of three warders, comes a month after guards raided the cells of the three in the prison’s maximum security section, known as the Basement. They recovered ammunition, a plastic gun, a cell door key and a key mould.

The escape is believed to have occurred after the three, who were shackled, overpowered the guards as they evidently fell asleep while the trio and three sentenced prisoners were exercising.

A warder, who cannot be named, said the three had chosen their time carefully, waiting to go for exercise with sentenced prisoners – a clear breach of prison protocol. “Moyo, armed with a hacksaw blade, convinced one of the warders to allow them to go dry their washing. They waited till the warders were sleeping.

“Once asleep, they finished cutting through their shackles and overpowered the guards, stabbing one in the hand. They tried to grab the gate key, but one of the warders threw it into the passage.

“The three forced the sentenced prisoners to strip and tied their uniforms, along with Moyo’s washing, together and made a makeshift rope.

“They climbed up steps to the courtyard toilet, through the toilet window, between the bars and windows of the cells bordering the exercise yard, past an empty guard tower, up a barbed-wire fence, onto the prison roof, before they jumped down the outside prison wall and climbed over two palisade fences. Within five minutes they were gone. It was that quick,” he said.

He said an investigation was launched to establish why the guard tower, which is meant to be occupied by an armed warder, was empty; why there were only three guards to six prisoners; and how the three acquired the saw blade. Spotting the men escaping, newspaper vendor Aaron Ncube, who works outside the prison, raised the alarm.

“I heard screams from the cells. When I looked up I saw two men jump off the roof. One tried to slide down several uniforms, but fell. The one ran across the road, but the others could not reach him. He was caught at the garage along with one who was stuck on the fence and the other on the road,” he said.

Mapisa-Nqakula, praising Ncube for his courage, said an investigation was under way to establish how the escape occurred. “This is not possible without collusion. Heads will roll, suspensions will be enforced and jobs will be lost.

“We will take staff’s cellphones and check to see if they were used to co-ordinate the escape. We will root out these unpatriotic people and purge the department of this scourge.”

Asked how the three were injured, she said they were bloodied, hurt and soiled on their own accord. “You jumped two storeys and got hurt. It is not from any assault. You did this to yourselves.

“I wouldn’t wish these injuries on you, because you still have to be interrogated and tell us how you escaped and who helped you.  Don’t worry now. You will be looked after nicely at our facilities,” she said, looking at them.

Correctional Services commissioner Tom Moyane, who denied a firearm was used, said the section they were held at was escape-proof.

“Therefore they had help. Our investigation will study the escape carefully. These men will be held in a high-security facility under 24-hour supervision in shackles at all times. They are dangerous serial escapees. We already had egg on our faces and will not allow this to happen again. Even in court they will have shackles,” he said.

* March 29 2011: Boksburg Prison. Escaped after sawing through cell bars and knocking bricks out of a wall. Arrested at Beitbridge in May while returning to SA for medical treatment.

* Three weeks ago: Prison officials receive information of cellphone to be smuggled into prison to Moyo.

Nine arrested in Khayelitsha after firearms discovered in minibus taxi