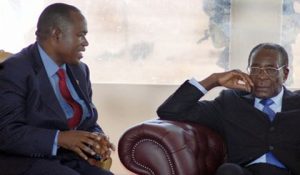 The dispute between central bank Governor Gideon Gono, and his former advisor Munyaradzi Kereke, scaled new heights this week with Kereke sensationally alleging that Gono stole millions of dollars and gold from the bank.

Kereke has also made claims that he is the one who wrote the examinations which earned Gono a doctorate degree. He said his removal from the Reserve Bank of Zimbabwe as an advisor was calculated to conceal Gono’s criminal activities at the bank.

Kereke was with the central bank for over 8 years but was sacked by Gono on the 1st February when it became clear relations had broken down. At the centre of the feud are allegations by Gono that Kereke authored a 20-page dossier detailing Gono’s financial misdemeanours.

SW Radio Africa has in its possession a 12 page letter written by Kereke, threatening legal action against Gono for his “continued acts of deliberate provocation and malicious destruction” of his name. Kereke accuses Gono of writing to senior government officials in an alleged bid to tarnish his image.

Kereke has now decided to expose Gono, telling him: “You abused public assets, ranging from cars, gold bullion, shares, etc for direct personal gain. I have explicit evidence on this and please challenge me openly so that the public pronounces their own verdict based on facts.”

Kereke accused Gono of giving the impression he fired him for disciplinary reasons, “yet you know very well that you did so to cover up the multiple acts of criminal frauds you, Dr Gono did for your own personal gain with your family.” Gono “bought many personal real estate properties,” with stolen money, Kereke said.

“Please take note that all the evidence, covering the actual addresses of the properties and amounts spent, is available and this evidence cannot be destroyed by any means you may seek to deploy now, even killing me,” Kereke added.

Kereke also warns that he has taken precautions: “There are at least three legal experts who have taken custody of the evidence to testify on my behalf in the event I cease to be here on earth, for whatever reason, given the real threats on my life these matters are now raising.”

In the letter Kereke also dares Gono to challenge him “through your lawyers or in an open forum such as Parliament, so that facts are laid bare in the national interest.” He said Gono took millions of dollars of foreign currency and built “his own personal granary of wealth”.

In one incident he said Gono, “directly participated and partook in the theft of US$6.5million that was stolen from the RBZ under your own signature through a close associate of yours”.

In December 2010 SW Radio Africa reported how Kereke was accused of raping an 11 year old girl at his home in the Vainona suburb of Harare. Activists dealing with the case said there were medical and police records confirming the rape.

Then came the startling revelation about Gono’s degree.

“Mr Gideon Gono, do you forget you yet again abused your authority by forcing me to literally do all the academic work on your behalf for the entire PhD studies upon which you were “conferred” the Doctoral Degree you now flaunt to the public as your own?”

Kereke also threatened to expose how Gono “used RBZ money to buy two houses as ‘gifts’ to the wife of a Deputy Minister here in Harare”.

“As a fellow Zimbabwean, my own conscience is clean and at peace that I stole no one’s penny and earned all that I have, academic, materially and spiritual beliefs through my own physical and mental efforts. Should you have evidence to the contrary, please report me to the relevant offices,” Kereke said.

Kereke ends the letter by saying: “If I do not receive your written proposed way forward to resolve these matters within seven days I will proceed to institute legal measures to protect myself against your shameless determination to ruin my young life to protect and save your dirty, criminal, and unpatriotic ways.”

The case highlights what many Zimbabweans have been saying over the years, how Gono was behind many of the policies that ruined Zimbabwe’s economy. The printing of money to fund quasi-fiscal activities that propped up ZANU PF is one example of factors that fuelled hyper-inflation.

But Kereke is no saint either. He spent 8 years as Gono’s advisor and it would be unlikely he spent that long in the job if he was not in agreement with Gono on much that was going on. Commentators say the dishing out of dirt on each other is simply a result of a break down in their relationship and more is set to come out. SW Radio Africa