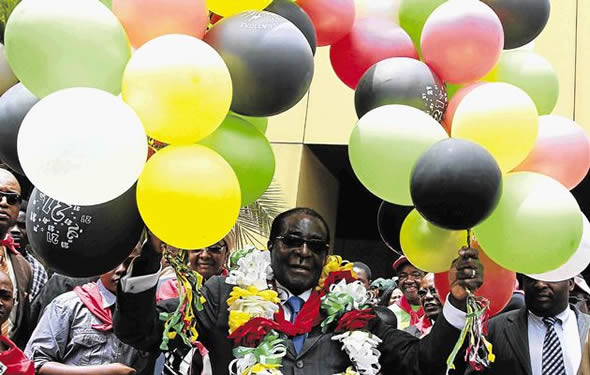 MUTARE – A man is in trouble with the law in Mutare after questioning President Robert Mugabe’s ability to blow up his birthday balloons given his advanced age and reported ill-health.

Richmore Mashinga Jazi, a self-employed carpenter, was watching live coverage of Mugabe’s birthday bash last Friday while drinking with friends when he allegedly suggested that the 88-year-old president had sought help to blow up the balloons.

“Ko ndiani abatsira kufuridzira Mugabe zvibharuma zvebirthday rake, uye achiri nesimba racho here? (Who helped Mugabe blow up his birthday balloons, does he still have the energy?) is the statement that got Mugabe’s loyalists mad, resulting in the arrest of Jazi.

Jazi is now before the Mutare magistrates court on allegations of undermining the authority of the President as defined under Section 33(2) a (ii) of the Criminal Law (Codification and Reform) Act Chapter 9.23.

Zimbabwe Lawyers for Human Rights (ZLHR), which has lawyer members across the country to assist victims of human rights abuses, is already challenging the constitutionality of the law at the Supreme Court.

Jazi, a 48-year-old Dangamvura man, who is represented by Blessing Nyamaropa of ZLHR, was not asked to plead when appeared in court on Monday.

Joma told the court that Jazi made the statement knowing that there was real risk or possibility that the statement was false and that it could cause hatred or contempt of the person of the President.

He alleged that Jazi was mocking and insulting the President by referring to his age and health. Trouble for Jazi started when he asked where prominent Mutare resident Penjeni Gwinyai, who had just entered into the bar, was coming from.

Gwinyai, the state alleged, informed Jazi that he had been at Sakubva stadium to witness Mugabe blow up his birthday balloons, prompting Jazi to query if Mugabe still had the energy to do so.

Gwinyai informed the police leading to Jazi’s arrest. Jazi is out on $20 bail and will be back in court on March 12. Mugabe’s birthday balloons usually come already blown up, leaving the octogenarian with the light task of tossing them in the air.

Jazi becomes one in dozens of people arrested for crudely referring to Mugabe, who is viewed as a demi-god by die hard supporters who include police, military and intelligence commanders. ZLHR says the law is being abused to shield Mugabe from legitimate criticism and scrutiny.

“The use and abuse of insult laws is misdirected. That section is too vague and that is why it is being abused. There is rampant abuse of the insult law and it needs to be challenged in courts like ZLHR is doing,” said Kumbirai Mafunda, ZLHR communications officer.

“The insult laws are intended to stop legitimate public criticism and debate around public figures on how they have delivered. With these widespread arrests, Zimbabweans are going to be scared to open their mouths,” Mafunda said.

The state has used the law to prosecute a cross section of the country’s population from villagers to MPs who have allegedly described Mugabe as a goblin, dog and homosexual.

She is accused of telling supporters at a rally that:

Muchauraya’s case, which goes back to October 2006, is still before the courts where he is challenging the constitutionality of the law. He is alleged to have told a rally: “Robert Mugabe is now old and is suffering from chronic diarrhea and is now living under the constant aid of a doctor.”

Muchauraya wants the Supreme Court to quash the case, arguing that the law violates his free speech while giving undue protection to a political rival, Mugabe.

“The provision in terms of which I am being charged makes serious inroads into freedom of expression to the extent that it allows the state to gag me in expressing my political sentiments and concerns relating to a political figure, the President,” argues Muchauraya.

“As a politician I have the freedom to freely express myself and use such language that may drive my political point home and resonate with my audience. The provision in question offends such freedom. Further no such restriction could be reasonably justifiable in society which has attained our level of democracy,” argues Muchauraya.

Mwonzora is also challenging the law at the Supreme Court on the same basis as Muchauraya. He is accused of uttering the following words at a rally held at Ruwangwe Growth Point in his constituency in March 2009:

Police took this to mean: “President Mugabe is a goblin and will run… I saw Mugabe bathing, towel on his waist, soap under his armpits and big beard… forward with MDC, down with bad government of thieves which arrest innocent people and taking away their property (sic).”

Ordinary residents and villagers have not been spared either.

Zebedia Mpofu, a 52-year old Harare man, was at one time summoned to court for  allegedly telling a workmate who supports Zanu PF that Mugabe’s supporters were only beginning to enjoy a relatively good life because of Tsvangirai’s entry into government. Daily News

This country needs fearless people to confront the regime: Karenyi