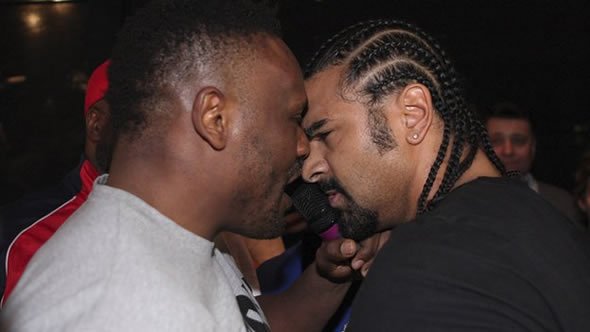 Zimbabwe born boxer Dereck Chisora has been banned indefinitely from boxing by the World Boxing Council for his shameful brawl with David Haye.

Chisora was involved in a violent confrontation with Haye in the press conference after his WBC world heavyweight title defeat by Vitali Klitschko in Munich on February 18.

The WBC said it was ‘one of the worst behaviours ever by a professional’ and demanded Chisora, 28, seeks anger management treatment before considering whether to lift the suspension.

Jose Sulaiman, president of the WBC, said the authority would also look to impose a ‘serious’ fine on the Zimbabwe-born fighter.

Zimbabwe sanctions should go as they only worsen crisis, UN…

‘The WBC absolutely condemns behaviour that is not to be accepted in boxing under any circumstances and will act as soon as it can to impose the fines and sanctions a we consider necessary,’ said a statement issued by the organisation.

‘Dereck Chisora is not going to tarnish the sport for those born in the humblest beds, who become sports heroes of the world to live a life of dignity and pride.’

‘The WBC will also take off from the WBC rankings the name of Dereck Chisora and declare an indefinite suspension against fighting again for a WBC title, while demanding Chisora to take an anger management medical treatment after which his suspension will be reconsidered.’

In reality the WBC’s ban is unlikely to impact on Chisora’s existing options. He was unlikely to fight for their title again anyway, and faces a British Boxing Board of Control hearing on March 14 at which he can expect a lengthy ban.

Chisora was arrested then released without charge following the incident with Haye, which started after Chisora confronted his fellow Londoner at the post-fight press conference.

Following the resulting brawl, Chisora shouted threats at his rival, who subsequently left Germany and is wanted for questioning. The WBC statement made no mention of Haye, who is currently unlicensed.

Chisora issued a statement in which he admitted his behaviour was ‘inexcusable’, but added: ‘There were many things that went on behind the scenes that ultimately caused my frustrations to boil over – however, this is of course no excuse.’

The German Boxing Federation have already indicated that neither Chisora nor Haye will be welcome to fight again on German soil – another obstacle to Haye’s hopes of getting back in the ring with one of the Klitschkos.

The indefinite ban by the WBC has however drawn condemnation from Chisora’s manager and promoter Frank Warren, who described it as “arbitrary” and against the laws of “natural justice”.

“As his manager, I expect him to have a fair hearing. If he is found guilty of misconduct then so be it, but until we have a hearing I don’t see how anybody can determine what he is guilty of without hearing evidence from all the parties concerned,” Warren told Sky News.

Warren, while admitting he had no defence for some of Chisora’s actions, insisted that the London-based boxer was being unfairly treated compared to other fighters like Mike Tyson and Floyd Mayweather.

He blasted: “There hasn’t been any hearing, no-one has been called to give any evidence, I have never heard of anything like it before… bans made without people giving any evidence or for that matter taking statements of people who have offended.

“It’s an act of unnatural justice. Everybody has to have a hearing before any action is taken. I’m quite sure Dereck Chisora’s legal representatives will obviously have a lot to say about this, and I am quite sure some action will be taken. Nobody whatsoever has given any evidence in this, it’s ridiculous.

“The British Boxing Board of Control called a hearing for the 14th of March; there has been some correspondence between the German Boxing Commission where the fight happened and the World Boxing Council to determine who will conduct the hearing and what jurisdiction it would be under.

“What I find very strange about this is that there hasn’t been a hearing, an arbitrary decision that you are banned cannot be any form of natural justice.

“Even the German police let Chisora go after questioning him. There are some things which he did that are absolutely wrong, and I am not condoning that but at the end of the day you are entitled to a hearing before anybody makes a decision.”

Warren also slammed the WBC for being “hypocritical”.

He raged: “For the WBC it’s so hypocritical when you think of what they have done in the past. I remember for example Mike Tyson rolling about on the floor with Lenox Lewis they didn’t even stop the fight from taking place. They took their sanctions fees from that fight, and they have done that on numerous occasions over the years.

“First of all I was unaware that Jose Suleman was a qualified psychiatrist. If indeed that needs to be done [sending Chisora for anger management classes], it would be up to a qualified person to determine that, and certainly Jose Suleman isn’t.

“I will give you a quote from about a month ago after Floyd Mayweather was found guilty and sent to prison for battering his wife. The same Jose Suleman stuck up for him, he said these things happened. His words were at the time, as far as he was concerned, this was okay.” Daily Mail/Other agencies

Zimbabwe sanctions should go as they only worsen crisis, UN expert says

I have 100% confidence in our medical services: Simon Khaya Moyo