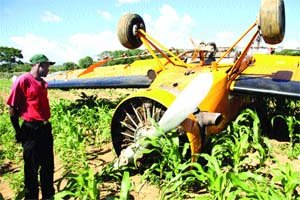 HEADLANDS- A pilot sustained minor injuries when an aircraft he was using to spray crops at a farm in Headlands crash-landed on Wednesday morning. The pilot, who was alone, sustained bruises on his right hand while the plane was extensively damaged.

According to witnesses the pilot believed to be from Harare was alone when the incident occurred at around 10am at Wakefield Farm. One of the farm workers Mr Jackson Mverechena said the plane arrived in the area on Wednesday after the owner of the farm had contracted it to spray crops.

“He flew it well and managed to spray some of the tobacco plants. I think problem started when he was coming back from the tobacco field heading towards the farm house in a bid to refill the tank with chemicals,” he said.

It is believed that the pilot, whose name could not be revealed, alleged that the aircraft developed a mechanical fault and he tried to make an emergency landing in a maize field. “That is when it crash-landed and overturned in this maize field.

Another farm worker Mr Taruvinga Nyakapanga said this is not the first time that such an incident has occurred in the area. “Last year the same pilot was involved in another crash landing at a nearby farm. He escaped with minor injuries again,” he said.

The farm owner has since employed an armed security guard to look after the airplane which was still on the scene. A report was made to the police and between Wednesday and yesterday they had been visiting the farm carrying out investigations.

Zimbabwe’s air safety record is among the best in the world though the country has experienced its share of accidents over the years. In 2010, a pilot and a his passenger were seriously injured when a six-seater airplane they were travelling in crash-landed at a school shortly after take off at Charles Prince Airport.

Four members of the same family died in Zvishavane in a light aircraft in 2005. The light private plane, which had taken off from an airstrip in Kadoma, crashed in Muchingwa. In July 1997, five people died in a plane crash at Victoria Falls.

Five passengers were treated for minor injuries when a light aircraft they were travelling in from Victoria Falls crash-landed on an island on Lake Kariba. The Cessna 2006, belonging to Southern Cross Aviation had its nose extensively damaged when the pilot brought the plane down for a forced landing on Redcliff Island.

A light plane crashed into a house in Kuwadzana, Harare, a few years ago.

Celebrity winners and losers in Zimbabwe 2011