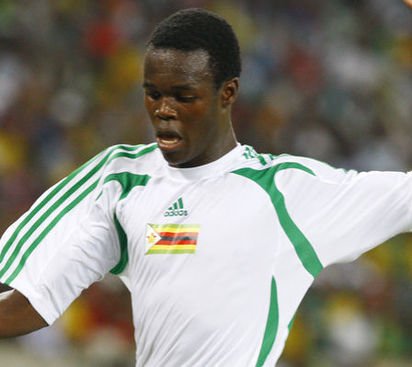 Warriors coach Norman Mapeza has named his chief striker Knowledge Musona in the squad that will face Liberia in an African Cup of Nations qualifier despite the concerns over the German-based forward’s hamstring injury.

A cloud of uncertainty has been cast over Musona’s availability for the Warriors’ crunch Group A assignment against the Lone Star on September 4 after the former Kaizer Chiefs hitman picked up an injury in his first full training with his new German Bundesliga club TSG 1899 Hoffenheim last week.

Initial indications from Hoffenheim are that Musona will be out for three weeks, which could also effectively rule him out for the showdown with the Lone Star. The Warriors, in third-place on the Group A table behind Cape Verde and Mali, need nothing short of a victory to remain in contention for a place at the 2012 Nations Cup finals.

It is against this background that coach Mapeza and his assistant Joey Antipas are not taking any chances, and would want their strongest possible side to go into battle.

Warriors manager Sharrif Mussa, who announced a 23-man squad that is expected to go into camp on August 29, said yesterday they had included Musona in their side as they had not received any official communication on the state of the player’s injury.

Mussa said he would also speak to both Hoffenheim officials and Musona but also indicated that the Warriors medical team would also make their own assessment on the extent of the striker’s injury. Musona has so far scored all the Warriors three goals in the 2012 Nations Cup qualifying campaign to underline his significance in the senior team’s attack.

With bustling Mamelodi Sundowns forward Nyasha Mushekwi already ruled out because of suspension, Mapeza has been left with limited options in his final line of attack in which he has included Edward Sadomba and rookie Simba Sithole. Mussa also said preliminary indications were that Musona could have recovered in time to take his place against Liberia.

Interestingly Musona scored his first goal for the Warriors in a 1-1 draw with the Lone Star in Monrovia on the opening weekend of the 2012 qualifiers in September last year. “We want to have 23 players in camp when it starts on the morning of Monday 29th August.

“We have gone ahead and done our normal call-up and included Musona for now because we have not heard anything besides what we have we are reading in the media. I will be speaking to Knowledge and I will also be contacting his manager and we will also ask for a full medical report from his club which our own medical team will study before any other decision is made.

“My sources have so far told me that the player has said he will be fit again in two weeks so everything will become clearer in the next few days,” Mussa said. The affable Warriors manager also explained that the coaches had opted to give long-term injury casualties Onismor Bhasera and Noel Kaseke more time to recover and regain full fitness.

“When you are in the process of looking at players and you have looked at the team that you would have been working with, you do not want interruptions and that is why the coaches have not made many any changes.  The coaches also want to give players like Onismor and Noel, who have been out for a long time because of injuries, enough time to fully recover but they remain part of our plans” Mussa said.

There was also no place for club-hunting midfielder Justice Majabvi, who has been trying his luck at South African clubs Bloemfontein Celtics and Kaizer Chiefs after quitting relegated Austrian Bundesliga outfit LASK Linz. But Ajax Cape Town winger Tafadzwa Rusike makes a return to the Warriors after being overlooked for the back to back clashes against the physically bigger Eagles of Mali.

Zifa are expected to decide at their board meeting in the capital whether to host the match at the more spacious National Sports Stadium or the Warriors’ favourite hunting ground- Rufaro.

Although Zifa’s main worry has been premised on the security at Rufaro, there are also genuine concerns about the poor state of the pitch at the National Sports Stadium, which may not be in good shape to help the Warriors’ cause in this decisive assignment.

Even Premiership giants Dynamos and CAPS United who featured in the Harare derby at the National Sports Stadium on July 24 were not amused by the state of the pitch.

But away from the serious Musona injury scare and the concerns over the state of the National Sports Stadium, the Warriors will have a familiar outlook when they troop back into camp with skipper Method Mwanjali, eccentric goalkeeper Tapuwa Kapini, the vastly improved Vusa Nyoni and veteran Tinashe Nengomasha being retained.