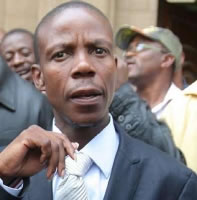 The much-talked about Incredible Happening Church’s “demon banishing” service in Katlehong on Sunday resembled a shoot for a blue movie.

We saw the church leader and self-styled prophet Paseka Motsoeneng insert his fingers into the vaginas of two female congregants as part of a ritual he performed to expel the demons that had allegedly possessed them.

Motsoeneng’s unorthodox demon banishing methods, which Sunday World has been advised might constitute indecent assault, left a bitter taste in the mouths of other help-seekers who attended the services.

Sitting on the lap of a female congregant, Motsoeneng placed his hand on the head of a 17 year-old teen, who cannot be identified due to her age, and started praying for her.

Zim woman recounts how husband was beaten, burnt to death in…

Motsoeneng told the congregants her tummy had swelled up because some sorcerers had cast an evil spell on her.

As he was praying for her she collapsed. Motsoeneng then told the teenager, who was lying on her back, to open her legs, which she did. He then plunged his fingers into her private parts and started moving his fingers inside her vagina.

As he was busy with his “healing process”, Motsoeneng ordered her to call him by his nickname, Mboro.

“Say Mboro,” he ordered her.

“Mboro” she said, with a stifled cry.

He was interrupted by a female congregant who brought him a glassful of what looked like ice-cream, which she spoon fed him. He was still sitting on the woman’s lap. While eating, Motsoeneng again ordered the teenager to call his name, which she did.

He then invited a woman he said was a “medical doctor” and whom he called Zozo to examine the teen.

“This is a qualified doctor who will tell us what the problem is with this woman,” he said.

By this time a group of female congregants had draped her lower body with what looked like a towel and surrounded her to prevent voyeuristic people from seeing her private parts.

“Dr” Zozo then inserted what she said was pregnancy test apparatus into the girl’s vagina, with Motsoeneng looking on.

“The pregnancy tests came out positive. She is pregnant. I could also feel the limbs of the foetus,” Zozo announced .

As Zozo was leaving the scene, Motsoeneng screamed: “Zozo, she is bleeding and her tummy has subsided.”

Zozo went back to inspect her before she rushed outside. She then came back wearing gloves and holding a pregnancy test kit. She inserted them into the teen’s vagina and took them out.

She announced: “Now the kit shows neither positive nor negative results.”

“Did you donate your biscuit to men?” he asked her.

He then said: “Haai, I want to ask all men in here to stop eating biscuit. Do you hear me? You must not eat biscuit anymore,” to which the visibly disgusted men did not respond.

Motsoeneng then asked a women to fetch a bucket.

The young lass was then lifted from the ground and made to sit on the bucket with her legs wide open, bleeding profusely, while Motsoeneng looked on.

He then said a stone had blocked her vagina and called a cameraman to come and film her, but changed his mind.

“This won’t be flighted on TV,” he said.

Two weeks later the teenage girl was shown on Motsoeneng’s programme on Soweto TV holding stones she claimed had come out of her vagina.

We had seen no such thing.

While his helpers and Dr Zozo were attending to the lass, Mboro called another young woman to the stage and made her lie down. The young woman, who was not asked to identify herself, was told to tell the packed hall what her problem was.

“I haven’t slept with my husband for some time because it hurts when we make love. Every time he penetrates me, it feels like he is cutting me with a sharp knife,” she said.

Mboro took off his shoes and placed his foot on her vagina.

“There’s something breathing in her biscuit. It feels like a heartbeat,” he said.

He later ordered the woman to take off her undies. She complied. He said he wanted to “stitch it with his holy water”.  Motsoeneng sprinkled water on his right hand and rubbed the woman’s genitals.

He ordered her to call her husband “with all the nice words in the book of love and tell him she would discharge her conjugal rights”.

“I’m now going to give it to you. You’ll eat nicely. The hunger is gone,” she said coyly.

Motsoeneng then called her husband and instructed him to “give her a deep kiss”.  After they kissed, Motsoeneng added: “Stop because I can see that you want something. You’ll finish the rest in bed when you get home.”

He called another young girl whom he accused of having been a Satanist who conjured up evil spirits. He asked his helpers to undress her and check if her vagina was wet.

After examining her they said she was dry. He asked the congregation whether he should expel her but they begged him to forgive her.

These episodes were not shown on TV. Sunday World News

Zim woman recounts how husband was beaten, burnt to death in SA